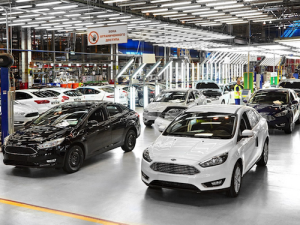 From mid-November, Ford Sollers is cutting production at its plants in Vsevolozhsk in Leningrad Oblast and Naberezhnye Chelny in Tatarstan for almost two months, including over the festive holidays. The joint venture’s third site in Yelabuga, Tatarstan, meanwhile, will not be producing cars for a month. Representatives of the company explained that the cut in output was due to the need to adapt to new market conditions in Russia.

"We are increasing the traditional winter vacation at all production sites of Ford Sollers,” confirmed a spokesperson for the company. “It helps to get in balance the production programme [with the] significant reduction in activity in the market. In the first nine months, the market fell by 33% and according to our estimates, it will continue to decline this year.”

The spokesperson added that the move was a common strategy used by companies amid downturns in demand and that it would not affect supply to the dealerships or end customers as Ford Sollers had prepared by organising “an adequate supply of cars”.

That reassurance is backed up by dealer representatives, who agree that the step will not have a negative impact on sales because storage units have been stocked.

“[Ford-Sollers] warned us ahead about halting the operation, so now the warehouses of our company are full with their cars,” said Vadim Arustamian, general director of automotive dealer Maximum.

However, there was another way of looking at that situation, according to Ivan Bonchev, managing partner of consulting company EURussia Partner. “Stopping production could mean that the company has excess of cars at the warehouses already,” he said, adding that most market participants believe that the level of car sales at the end of the year will be much lower that it was last year.

Novel Slutsky, who represents the dealer group, Alarm Motors, which sells Ford vehicles, also noted that carmakers in Russia would be cutting output in November-December in an effort to finish the year on minimum cash balances.

“An optimistic outlook for car sales in December is a decline of 50% compared with 2014,” said Slutsky. “This is due to the excessive demand on the market last winter because of the sharp devaluation of the ruble."

Staff reduction
It has also been reported that Ford is planning to cut wages for workers during the shutdown periods by a third, and permanently losing as many as 190 staff from the beginning of next year.

Artem Yashenkov, a spokesperson for the union ITUA, which represents workers at Ford Sollers plants, said that the company has plans to payoff those workers with a redundancy equal to five months’ salary.

A number of Russian sources indicate that layoffs will be on Focus or Mondeo lines. The sale of cars in the C and D segments saw the biggest decrease compared with the average figure for the market – by 47% and 38% respectively.

It remains unknown if the company aims to decrease the volume of production of these models next year.

According to information from the Association of the European Businesses, sales of Ford in Russia in January-September decreased by 41% compared to last year, to 26,600 cars. The entire market during this period saw a drop by 31% to 1.2m cars.