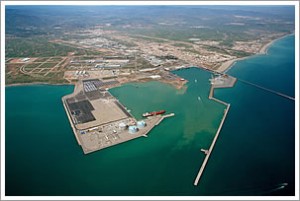 The Mediterranean port of Sagunto, which is managed by the Valencia port authority, finally appears to have realised its potential as a Spanish hub port for finished vehicle volumes. Ford, which previously moved much of the output from the nearby Almusafes production plant through the port of Valencia, has announced that it is to henceforth export up to 100,000 units annually from Sagunto.

An agreement has been signed with operator Noatum Ports, which operates the Terminal Polivalente Sagunto (TPS). As part of that deal it will now concentrate mainly on exporting finished vehicles for Ford from Spain to North America but also ship some consignments to other destinations in Europe. Baltimore, Halifax, Jacksonville and Newark ports are the main destinations that will be served, by Grimaldi Lines, NYK, Höegh Autoliners and Neptune Lines.

Shipments began in early December. A shipment of Fords were sent by Neptunes lines on December 4th; on December 5th, Grimaldi Lines took delivery of 1,400 vehicles.

In the meantime, Bergé set up a subsidiary specifically to operate in Sagunto, given the arrival of Toyota imports there, only to have this business wound up in March this year, having failed to attract sufficient shipment to make it worthwhile.

Unsurprisingly, TPS director Rafael del Moral, noted that, "The impact of this new agreement [with Ford] will lead to an increase of more than 20% in the current activity at the port of Sagunto."

For his part, the mayor of Sagunto, Sergio Muniesa, pointed out that “the agreement between Noatum and Grimaldi reinforces the idea of converting the Ford plant at Almusafes and its logistics park in Sagunto into an authentic automotive hub.”

Prior to the Ford volte face, Sagunto had been on course to handle just 9,000 finished vehicles produced by Ford this year, although this will now rise to 45,000 units. Next year, throughput is expected to treble.

In part, the change of mind has been prompted by an announcement made in October that the Almusafes plant would double production from 228,000 to 450,000 vehicles a year as a result of building new models such as the Mondeo Galaxy and the S-Max.

Vigo is another of Spain's smaller ports that is also benefiting from enhanced finished vehicles business.

Earlier this year Peugeot-Citroën launched a new service in conjunction with Suardiaz to move new vehicles between the port of Vigo, in the Spanish north-west, and the French port of Nantes-Montoir. This has recently received grants of €3.5m ($4.4m) from the European Commission as part of its TEN-T development programme. This new influx of money will allow Gefco, PSA's logistics arm, to increase the number of shipments from three a week to four a week as of 2016.

The money will be spent on modernising the two ports. At Montoir, this will consist of building a new berth for ro-ro vessels, while Vigo will receive a new floating ramp.