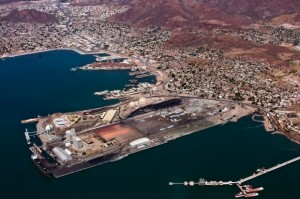 Ford is to begin trials at the port of Guaymas (pictured) with a view to exporting vehicles through it from its Hermosillo plant, Guillermo Ruiz de Teresa, ports coordinator at Mexico's Transport and Communications Ministry, has revealed.

The trials will be held to ascertain how badly its vehicles may be affected by salt levels at the location.

Ruiz de Teresa said he was confident the port would soon be exporting Ford’s vehicles. “From here they export 2,000-2,500 vehicles to the Pacific and we are the logical place to do that from, given that we are just 100km-200km from the plant.”

Within the next three years, he added, exports finished vehicles in Mexico would reach 3m units a year, making it vital for the country to develop its port infrastructure.

“If we are going to pass from being the world's fourth largest manufacturer to its second, we must have space in all our ports,” he said. “Currently, we produce 3.6m units annually of which we export 2.2 million units, 900,000 of which are handled by our ports.”

Transport Minister Gerardo Ruiz Esparza underlined the need to develop the necessary port infrastructure, with forecasts for traffic reaching 5m finished vehicles a year by 2018 and the number of exports doubling.

“We have to expand the ports,” he said. “Without the ports, production capacity in Mexico is limited.”

Sonora governor Claudia Pavlovich Arellano Gobernadora said the state would do everything it could to ensure the Ford business came to Guaymas.

Ford, which builds the Lincoln MKZ and Fusion sedans from Hermosillo, has so far declined to comment on the use of the port. Last year, however, the carmaker started using the Pacific port of Mazatlan to export vehicles from the plant to the port of Portland, Oregon, both for domestic distribution as well as to combine with other Ford and Lincoln vehicles for export to China, said Gabriel López, president of Ford Mexico in an interview with Automotive Logistics. More details will be published shortly.