Former Audi exec to head up manufacturing at Tesla 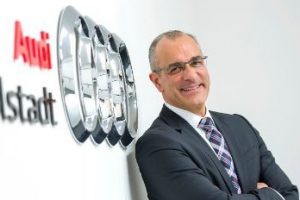 Tesla has announced that former Audi executive Peter Hochholdinger (pictured) is to take charge of manufacturing there.

Hochholdinger will be vice-president of vehicle production and will be responsible for the Model S, Model X and upcoming Model 3, as Tesla tries to boost vehicle output roughly tenfold to 500,000 units a year by 2018.

Hochholdinger worked at Audi for 22 years and headed up production of the A4, A5 and Q5 models – nearly 400,000 units a year overall. He was in charge of more than 10,000 manufacturing employees and had an annual budget of 750m euros.

The announcement follows recent news that two of Tesla’s top manufacturing executives, Greg Reichow and Josh Ensign, are to leave the company. This came after a series of delays and recalls with the Model S and X, neither of which came to market at the projected time.

With Tesla facing such a huge ramp-up in production volumes, Hochholdinger’s experience at a ‘traditional’ OEM will certainly prove valuable. He is also someone who clearly values logistics, telling AutomotiveIT recently: “For me, production, logistics and IT are inseparable.”