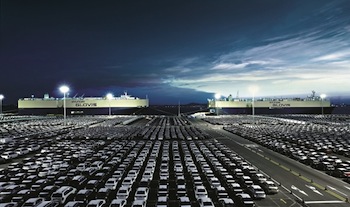 Despite the measures taken so far to clean up maritime transport and reduce the associated greenhouse gases, more needs to be done. That is the warning from the International Transport Forum (ITF) in their October policy briefing.

The ITF is an intergovernmental organisation with 57 member countries. It acts as a think-tank for transport policy and organises an annual summit of transport ministers. It is also the only global body that covers all transport modes.

To achieve the goal of keeping global warming within a 2°C pathway by 2100, greenhouse gas emissions from shipping would need to halve by 2050, and achieve zero carbon emissions by 2080. However, emissions are set to rise substantially, and action will need to be taken to counteract this.

International shipping contributed 0.8 billion tonnes of CO2 emissions globally in 2012, which represented 2.2% of worldwide carbon emissions. Since 1990, shipping emissions have doubled, despite a 10% decrease during the economic downturn between 2007 and 2012. In 2050, CO2 emissions from maritime transport are projected to be between 50% and 250% higher than they are currently: the main explanation for the rise is an increase in maritime trade, and the main explanation for the decrease since 2007 is slow steaming.

The International Maritime Organisation (IMO), a special agency of the United Nations, regulates shipping emissions. Since the 1997 Kyoto agreement, which gave responsibility in this area to the IMO, the agency has taken measures to enforce regulations on ship design to increase the energy efficiency of ships. And of course, at the start of 2015, the sulphur emission control area (SECA) came into effect.

The ITF states that the main potential measures to mitigate shipping emissions are lower speeds, high ship utilisation rates, energy-efficient designs and the use of alternative fuels.

Ahead of the 2015 Paris Climate Conference, which starts at the end of November, the ITF is urging members of the conference to agree to an ambitious package for the shipping sector. It is hoping that this will include several aspects, including an emissions target for shipping, related to reaching a 1.5C or 2C pathway.

The ITF also suggests a mandate for the IMO to develop an action plan with concrete measures to reach the emission target, leveraging speed, utilisation, energy efficiency, and alternative powertrains.

And finally the ITF suggests a carbon tax for the shipping sector, which has the advantage of administrative simplicity. If the rate was set at $25 per tonne of CO2, the ITF says that the impact on maritime trade would be marginal, and the tax could be a substantial source of finance for the Green Climate Fund.