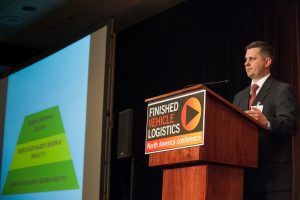 The US marine highways, including coastal shipping and inland waterways, cover 29,000 nautical miles, compared to the circumference of the world, at 24,901 miles. That scale shows the huge importance of the country’s waterways, arteries that remain highly under utilised in the general freight sector and especially the automotive industry. Currently, for example, there are almost no examples of new vehicles moving by river barge in the country, while short-sea ocean shipping remains a relatively niche trade, mostly out of Mexico.

At the recent Finished Vehicle Logistics conference in Newport Beach, development of the waterways was an important topic for debate. The US Department of Transportation (USDoT) views the marine highway as a “system of reliable, regularly scheduled services integrated with the rest of the surface transportation system,” said Scott Davis, acting director at the office of marine highways and passenger services Maritime Administration. However, he explained that water is not used to its full potential.

To incentivise development, the Maritime Administration has dedicated marine highway projects and grants. Davis explained that currently, $70m worth of new projects are now coming to life, with more funds involved in developing other projects. Funding is expected to increase with the eventual passage of a new highway and infrastructure bill, which is currently delayed.

Projects are awarded based on the areas of opportunity, the public and private benefits, infrastructure, capital costs, and market forces, and the DoT is willing to support new ideas. Davis said that to get a new maritime service off the ground, it takes innovative vessel operators and innovative shippers. He highlighted several projects supported by the DoT, including barges along the Mississippi River that included companies such as Walmart and Home Depot.

It is not entirely clear as yet if the automotive industry has an appetite for moving vehicles by barge and inland waterways. However, shipping vehicles by ocean, of course, is used, at least for imports, exports and shipments out of Mexico. Per Folkesson, president of region Americas for Höegh Autoliners said that further development of ports could be an effective way to overcome shortage on road and rail. “We need to push for faster development. The industry needs to be bold and act now,” he said. He also explained that it is important that the ocean carriers managing marine highways play an integral role in the supply chain.

Folkesson revealed, for example, that Höegh will develop a new terminal at Freeport, Texas, which will handle exports as well as imports, including from Mexico. “We believe that rather than shipping vehicles to the west coast and then moving by rail to Texas, for example, it will be more efficient to deliver straight to the Gulf,” he said. Terminal operator Amports will provide labour at the terminal.

Such investment in ports and terminal will become more important as the automotive industry continues to grow. Gary Love, vice-president of sales and marketing at terminal operator FAPS, which operates at the port of New York and New Jersey, pointed to IHS Global Insight forecasts for the US to sell nearly 24m vehicle sales by 2028. He wondered whether the country’s ports would be able to handle the increased volume.

Love pointed to the need for ports to work with railways to make sure the right infrastructure is developed. He was ultimately optimistic that the automotive logistics industry can manage upcoming challenges with strategic planning, including having the right balance of short sea, rail, and truck.