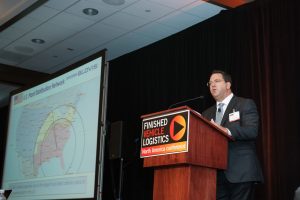 While sales and production of new vehicles in North America still growing, there are lingering worries that logistics options are not keeping up with volume or the higher complexity. Although the situation has improved somewhat this year, rail velocity and cycle times are still behind their historic levels, while a worsening driver shortage is becoming critical to the trucking sector.

Speakers at the recent Finished Vehicle Logistics North America conference confirmed that moving vehicles by rail has improved following particular difficulties in 2014. Brian Mason, national manager, strategic planning and communications at Toyota Logistics Services, said that frank communication from railways was needed, and was happening more often. “By having openness and honesty, we’re able to plan more and we don’t get into the hole of too many vehicles in one place,” he said. “We’re in a much better situation than a few years ago.”

Robert Farrell, executive director of the Automobile Carriers Conference (ACC) at the American Trucking Association, said it was also a great time to be a car hauler, with high production rates and new plants coming online in the US and Mexico – but he saw reason to worry about infrastructure, capacity and a growing lack of drivers.

Difficulties remain apparent in on-time performance and delivery across the supply chain. Glenn Clift, president and chief executive officer at Glovis America, which runs logistics for Hyundai-Kia, acknowledged some improvements in rail, however he made it clear that he was still unhappy with overall services, and that currently it was “one step forward, and two steps back”.

Glovis is moving more finished vehicles by truck, and currently operates one of the largest truck direct delivery areas of any assembly plant in the US for Hyundai and Kia plants in Georgia and Alabama. Glovis sends most trucks between 250 and 500 miles (400km-800km), with some going as far as 1000 miles. The company is also considering expanding trucking further. “We’re not doing this as a short-term measure,” said Clift. “We’re doing it to turn around the rail issues.”

One issue, as far as Clift is concerned, is a lack of investment in railways. Although railways executives revealed investment plans for more than 7,000 railcars over the next two years, Clift suggested that this would not be enough, and he encouraged providers to keep up with the market. “Analysts are predicting growth, myself and my team are predicting growth, and hopefully suppliers will believe all that too.”

However, he also acknowledged problems with rail velocity and a high inventory of vehicles awaiting transport were as much to do with rising variability in production as they were any equipment shortages. “Railroads prefer to improve network operating efficiency to maximise railcar cycle time, however an endless number of factors continue to keep the rail industry from achieving the desired cycle time,” said Clift.

However, those hoping that they might overcome issues on rail by relying more on road might be disappointed. ACC’s Farrell pointed to truck capacity issues, congestion and driver issues.

While Farrell said the strong market would help address most issues, the driver shortage was a real worry. Demographics are not in the industry’s favour, as the baby boomer generation retires and few younger drivers take up the profession.  According to Farrell, only 6% of drivers are under 35, with about 35,000-40,000 drivers needed across the general trucking sector – a figure predicted to be 200,000 by 2020. Younger drivers are put off both by the lifestyle, but also stricter regulations on safety records and hours of service