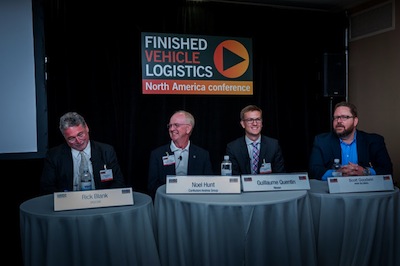 Damage caused to vehicles moving from factory to dealer can be caused by a multitude of things: weather, vandalism, carelessness, accidents or technical issues. But this damage, even if to a small percentage of an OEM's outbound volume, are costly, delay vehicle delivery and damage brand reputation.

Technology, an increasing focus on KPIs, and communication between logistics service providers and OEMs, is helping in some way, but there is still further to go. Guillaume Quentin, senior manager, finished vehicle logistics, strategy, engineering and quality assurance at Nissan North America, said the OEM takes a different approach to quality versus cost. “There is an increasing focus on the customer. Going back for years, we were mainly cost driven, but Nissan has clearly shifted to total customer satisfaction management,” he said.

Working with third party logistics providers, Quentin said Nissan's damage free rate is around 99.7%, but this is still around 5,000 cars with damage, which is a significant number. And while customer satisfaction is very important, damage directly impacts profit and business.

“My approach is three words: prevent, detect and correct,” he said. Prevention starts internally and carries through to the 3PL. Some of the basics include notably not drinking, smoking or sleeping in the cars (which may sound unbelievable, but has apparently been done). Quentin also said he wants to prevent a dealer employee inspecting a car, with keys hanging out of his pocket, which then scratches the car. “You have to make sure everything is aligned to properly protect the car and have good quality up to the final customer, to drive overall opinion up,” he said.

As part of Nissan's push on customer satisfaction, the OEM tries wherever possible to catch damage before the vehicle gets to the carrier. Quentin said that aging stock units on yards are re-inspected before they are shipped as an extra quality check. “We've also been using analytics and looking at trends because nought-point-something damage rate is still an issue.”

Quality in MexicoWhile the Mexican market is booming, maintaining quality in the country is not easy. The biggest challenge for Nissan with regards to quality and damage in the Mexican market is currently vandalism, particularly when cars are on rail wagons that are not moving. “It is affecting the entire industry. We've seen a real increase over the past year in the number of damaged vehicles,” Quentin said.

The most common issue is key fobs that go missing from the cars. As a first measure, Nissan tried hiding the keys on trains, but the number stolen only increased. Since then, the OEM has combined action with its rail carrier to limit access to rail wagons, as well as ensuring trains are dedicated so that they don't need to stop so much along the way. Those issues are showing positive results which will need to be confirmed long-term, Quentin said.

Richard Blank, vice-president of finished vehicle services business development at Vascor, which manages several yards and operations in Mexico, said the quality challenges in Mexico vary around the country. “Turnover, hiring, locations of plants where the population is, this is all problematic,” he said.

He also explained that it is important to know about employees, training, differing laws and the cost of doing business in Mexico. Mexican wages are still cheap – assembly line workers make, on average, around $6 per hours, while supplier labour can be as little as $2, according to data from PwC Autofacts. However, a lack of highly skilled labour can be a challenge. “From a quality perspective, when you can get the correct workforce it's good,” Blank said.

Scott Goodwin, vice-president at KHS, a paintless dent removal and hail damage repair company that has just opened an office in Mexico City, admits it is not a mature place for the company yet. “We do understand the nuances and challenges customers are having with vehicles coming up out of Mexico. We hope we'll get there quickly, but wants and desires are not always executable in Mexico, at least not at the speed you want to get them done. You have to be patient and go at the same speed of Mexico,” Goodwin said.