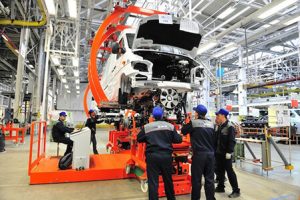 Gaz Group is reported to have said that it may have to cease vehicle assembly in Russia in June because of recently imposed US sanctions that have blocked the import of automotive components from the US, Germany and the Czech Republic.

The OEM’s production and export operations have been in doubt since the US announced its intention to apply sanctions to seven Russian businessmen including Gaz Group owner, Oleg Deripaska, last month.

According to a recent Reuters report citing several sources close to Gaz Group, the US sanctions only officially prohibited US citizens and US-based companies from trading with Gaz. In practice, however, they could affect all foreign currency transactions and all contacts with partners connected to the US, as well as Volkswagen and Skoda production.

Gaz has not disclosed its localisation rate for parts supply but Russian consultancies suggest the company is dependent on imported components. Vladimir Bespalov, senior analyst at Russian think tank VTB-capital, estimated that in early 2018, currency fluctuations posed serious risks to the carmaker as it was reliant on such imports.

Gaz Group has been assembling some of its vans using engines imported from the Chinese plant of US-based components manufacturer, Cummins. It has also purchased transmissions for some of its vehicles from US-based Allison Transmission. Both lines of supply will now be curtailed.

Most of the components Gaz Group imports are purchased in Europe but even these could now be in jeopardy because of secondary sanctions imposed by the US government.

Anna Bradshaw, a lawyer at Peters & Peters Solicitors, said that according to the Countering America’s Adversaries Through Sanctions Act, even non-US residents could be subject to such secondary sanctions for having “substantial business” with Gaz Group.

Russian newspaper Vedomosti, citing several analysts, said the threat of secondary sanctions could lead to the complete isolation of companies falling under recent US sanctions, as they would be restricted to business only within Russia.

The Russian authorities have previously said they may introduce penalties for companies refusing to cooperate with suppliers affected by the US sanctions in Russia. However, several non-US companies, for example Raiffeisen Bank International, have already reported that they would have to withdraw from any business with such companies.

Ownership loopholeGaz may just have a way out of the situation, however, if it breaks its ties with Oleg Deripaska. In an amendment to its Russian sanctions programme in late April, the Trump administration offered affected companies the chance to get off the US blacklist if they changed ownership.

Several top Russian government officials have started looking at the possibility of buying companies subject to US sanctions from their current owners. Deputy prime minister Arkady Dvorkovich said such purchases woud be possible “if the owners ask the government to do so”.

The idea has been supported by the Russian Union of Industrialists and Entrepreneurs and several other business associations in Russia.