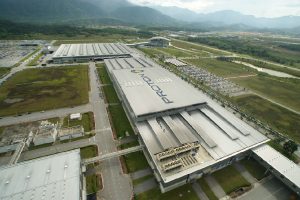 Chinese carmaker Geely will take a 49.9% stake in Malaysia’s Proton group, as well as a 51% controlling interest in luxury car brand Lotus as part of a deal with DRB-Hicom Group.

Under a $360m bailout agreement signed with the Malaysian government last year, the carmaker was required to find a foreign strategic partner that would “assist in research and development to enable Proton Holdings to be a competitive player in the automotive industry at an international level.”

The deal will give privately-held Geely access to the ASEAN market and also an R&D and manufacturing presence in the region. The owner of the Volvo car brand already has facilities across the globe, including 16 manufacturing plants, 7 design studios and 5 research & development centres.

Proton believes it can tap into Geely’s vast range of platforms and powertrains, while also gaining access to the Chinese carmaker’s existing markets and right-hand drive markets in south-east Asia.

DRB-Hicom CEO, Syed Faisal Albar, said: "I believe that with a new strategic partner, Proton's development will enter the fast lane, and get a new life.”

The final agreement is expected to be signed by mid-July.

According to a DRB statement, in the 12 months to the end of March this year, Proton made a net loss of 987.3m ringgits ($230m). The UK-based Lotus Advance group made a loss of 68m ringgits over the same period.