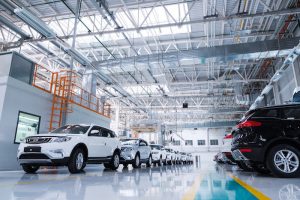 BelGee, a joint venture between the government of Belarus and Chinese carmaker Geely, has just opened the biggest vehicle assembly plant in Belarus.

Total production capacity at the plant in Borisov will eventually be around 120,000 vehicles a year.

Output will be gradually ramped up, it was revealed at the opening ceremony on November 17th, with around 1,800 Geely Atlas units being produced before the end of this year from imported complete knockdown (CKD) kits; an estimated 25,000 cars being assembled next year, including production of the Emgrand X7 from January and the Emgrand 7 from May; and output rising to 35,000 vehicles across the same models in 2019.

At the ceremony, which was attended by Belarus president Alexander Lukashenko and senior officials from the Zhejiang Geely Holding Group, it was confirmed that BelGee would import components from tier one suppliers in the EU working with Geely-owned Volvo. Initial localisation rate will be around 31% but in 2018 this will rise to 52% as part of the joint venture agreement.

Russian consultancy Autostat suggested BelGee was set to localise production of engines, as well as front and rear axes, in Belarus. ABS and ESP systems will be sourced from Robert Bosch in Russia, meanwhile, while alloy wheels will be provided by Russian manufacturer SKAD.

Sales marketsAt the opening ceremony, President Lukashenko said Belarus government agencies would exclusively purchase Geely cars within their official procurement programmes from now on, and promised to introduce new policies to encourage Belarus citizens to do the same.

The domestic automotive market in Belarus is small, however, and BelGee plans to export much of its output to Russia, Ukraine and Kazakhstan, with up to 90% of its maximum 120,000-unit capacity going to the Russian market, Belarus prime minister Vladimir Semashko stated shortly after the opening ceremony.

Geely previously assembled finished vehicles at its plant in Chercesk, Russia, but shut that line down in 2016 in anticipation of the new site. It is expected to stop importing finished vehicles into the Eurasia Economic Union in 2018.

Between January and November this year, Geely sold only 1,872 finished vehicles in the Russian market, however, and some market observers have suggested the joint venture will struggle to increase production at the new plant as planned.

Chinese cars are not popular among Belarus citizens, they contend, and in any case, due to the economic situation in the country, demand for new cars there is likely to remain quite weak over the next few years.