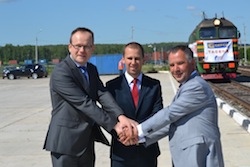 Transport and logistics provider Gefco has recently launched a rail link from the Latvian sea port of Riga to the Rosva industrial park in Vorotinsk near Kaluga in Russia. The link will remove the need for any road transport between the two locations, which will bring down costs and improve efficiency according to one spokesperson for the project.

“We completely excluded road transportation from the logistic chain and with the help of the Russian Railways created the competitive infrastructure,” said Nicholas Kruchinin, general director of Taskom Company (pictured right), a regional logistic operator and one of the main partners with Gefco in the project.

Kruchinin said two main customers had already taken up the new service: Fuyao Glass Rus, a glass supplier to the automotive industry; and PSMA Rus, the Russian joint venture between PSA Peugeot Citroën and Mitsubishi, which has a plant in Kaluga. He said others were expected to follow.

Kruchinin went on to say that road transport meant delivery took longer and was often unpredictable, being subject to the region’s hard weather conditions and traffic jams, factors that negatively affected the “working conveyor” of manufacturing supply.

He also stressed that the plants located in Rosva industrial park were in the immediate vicinity of the main cargo operations and customs clearance zones in Kaluga, just 800 metres from the terminal, something that was central to area’s development as a logistics cluster for the automotive industry.