Gefco to build up intra-Asia network for China auto trade 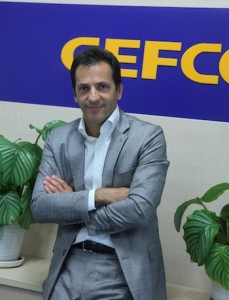 Logistics provider Gefco plans aggressive growth for its Chinese and Asian business, including investing in its own fleet for vehicle distribution in China. The company also expects to increase the amount of automotive freight, including finished vehicles and materials, it moves between China, Russia as well as Southeast Asia, where it will open new subsidiaries this year and next.

Growth in China for Gefco during 2013 was around 35% compared to 2012, according to Gefco China managing director Andrea Ambrogio (pictured left). The logistics provider has aggressive plans for China in 2014. “Our budget is to increase by 50% across all business units,” Ambrogio told Automotive Logistics. “We are pushing everywhere. For finished vehicle logistics, we are targeting a 60% growth. In freight forwarding, we are aiming for a 35% increase, while we think that we can double our warehousing business.”

Over the three to four years to follow, Ambrogio believes that the company will sustain growth rates as high as 20-25% per year in China.  [sam_ad id=6 codes='true']

During 2013 the company opened new branch offices in Chengdu, where OEMs including Volvo have recently launched factories, and where DPCA will build a fourth plant together. Another office opened in the southern city of Shenzhen, home of a new CAPSA joint venture factory that builds premium DS vehicles, which together with branches in Hong Kong and Guangzhou are important hubs for freight forwarding.

This year, Gefco plans to open offices in Ningbo, south of Shanghai, as well as in Dalian, in the northeast. 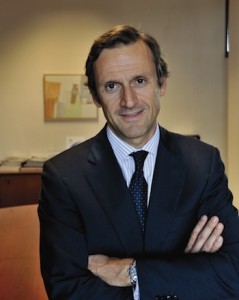 Along with the push into China’s growing western regions, the logistics provider plans to open subsidiaries in Thailand, Vietnam and Indonesia, according to Christophe Poitrineau, president of Gefco’s Asian operations. Poitrineau’s vision is to develop strong intra-Asia flows for vehicles, complete knockdown kits (CKDs) and other cargo between China, Southeast Asia and eventually India.

“I think that in the next few years Chinese carmakers will export more and more cars to Southeast Asia especially,” he said. “If we can build up a good network there for Chinese OEMs, we will have some good opportunities.”

Gefco’s expansion plans overlap with strategies unveiled recently by DPCA , after Dongfeng took a 14% stake in the French OEM. Both companies have planned increased production and sales in China, as well as their intentions to increase exports, particularly to Southeast Asia.

“We have in front of us a huge opportunity to extend our parameters to Dongfeng, PSA and other Chinese carmakers,” said Ambrogio. “While so far there has not been much focus on exports, DPCA has said that it would open a subsidiary and start to export to regions like Southeast Asia, as well as other Asian regions. This is exactly where we are or where we are growing our network.”

The other area in which Gefco is banking on growing its import and export business for China is with railway services between Russia, Central Asia and Europe. According to Ambrogio, it’s a project that has been designed at the specific request of the company’s 75% shareholder, RZD Russian Railways.

While Gefco intends to offer a regular, block train service on the route, Poitrineau said that Gefco has only run spot services so far. However, Ambrogio noted a growing interest from Chinese carmakers in moving vehicles and CKD kits to Russia and Kazakhstan. 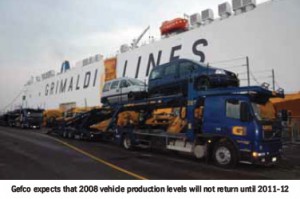 Ambrogio also revealed that Gefco China would invest in its own fleet of vehicle hauliers in China. Last year, the company won a contract to handle vehicle imports for Volkswagen and Skoda through the ports of Shanghai and Tianjin, including onward delivery to dealers.

While the company is currently using dedicated sub-contracted trucks in China, Ambrogio said Gefco would invest in its own fleet to gain better control cost and quality. Investment could be directly in equipment or through dedicated subcontracts, although he declined to give specific targets for fleet numbers. In a second phase, the fleet could be extended for spare parts deliveries as well, he said.

In China, poor enforcement of truck standards has led many carriers to use overloaded trucks that carry as many as 20-25 vehicles. Ambrogio maintained that Gefco would only purchase or contract the legal standard lengths.