Georgia ports see growth in all sectors in 2014 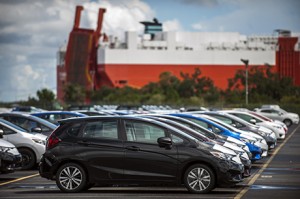 The Georgia Ports Authority (GPA) ended last year with growth across all cargo sectors, including a 7.4% increase in total tonnage, and a 10.2% increase in container handling.

The port of Brunswick in particular continued to dominate in automotive and machinery trade after moving 688,575 units for the year. When combined with the ro-ro trade through the port of Savannah’s Ocean Terminal, GPA handled 716,055 units last year, which is an 8.6% increase, or 57,190-unit increase year-on-year. Brunswick is the second busiest port in the US for automotive related cargo, and second for total automotive tonnage, behind the port of Baltimore.

In fiscal year 2014, the Authority processed more than 700,000 vehicles and machinery units, with the majority handled at the dedicated Colonel’s Island automotive and machinery terminal. Brunswick moved 670,866 units, and the port of Savannah’s Ocean Terminal moved 29,548 for a record 700,414 units.

More than 20 OEMs use the port, with Hyundai-Kia, Mercedes-Benz and Volkswagen accounting for a significant amount of business.

With this continued growth at the end of 2014, GPA said it would continue to develop its facilities. In summer last year, the port announced it has a US Corporation of Engineer’s permit to develop 300 hectares on the Colonel’s Island facility, and said it could now move forward with OEMs and auto processors.

“The available land and infrastructure are keys to maintaining our competitiveness and growth,” a spokesperson said, adding that Brunswick was the number one US port for new vehicle imports.