Getting the sea legs back again

Ocean carriers are sailing just a bit steadier as they emerge from the stormiest of seas this past year, with at least a mild recovery anticipated for Asian trade lanes in 2010. Finished Vehicle Logistics charts their course.

The global economic downturn has led to significant declines in the intercontinental flows of vehicles. Established markets took a steep plunge, while the flows to and from emerging markets dropped even more. Ocean car carriers have faced the grim choice of reducing calling frequency or removing existing tonnage (or both); the new vessels ordered during the boom years have remained in shipbuilding limbo, or come online only to worsen the capacity glut. As markets start to rebound, volume in developed markets is well below the current shipping capacity. Carriers must accommodate recovery where it emerges, maintain service on existing routes, while still navigating difficult financial waters.

Circling the globe to find growth
The crisis has caused carriers to think short term, reveals Kai Kraass, the chief operating officer of Wallenius Wilhelmsen Logistics. “We run the risk of being too short term in our approach by seeing the risk but not the profit. On the other hand, we now have a much wider opening for cooperation with the shipper because we are more cost-focused,” he says. Since exports from the main exporting Asian countries fell about 50% in 2009, that is where the rebound will be most visible, according to Olav Sollie, head of communications and board Relations at Höegh Autoliners. Typically, exports from Asia account for 70% of the ocean volume of cars and light commercial vehicles, mainly from Japan and South Korea; Europe handles 20% of exports and North America about 5%. Globally, ocean volumes are down by 25-30%, notes Kraass, adding that Asian exports to North America and Europe show the sharpest drop. “This year will be much stronger than 2009, with a 10-20% increase possible,” he predicts. For Kia Motors (UK), its volume improved following the UK incentive programme. “We hope to stabilise volumes in 2010. Volume will be coming in by the end of the first quarter,” says Awais Ajwal, head of supply chain.

Kraass remarks that emerging markets are coming back faster than developed markets, and predicts that globalisation wil 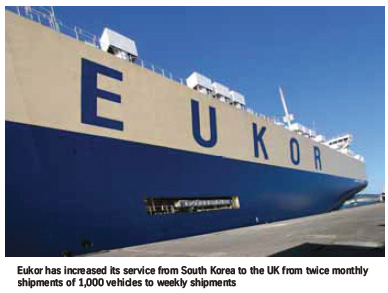 l increase during the next three years. For WWL, China is the only market that has improved (although its exports remain sharply down). Last summer, WWL increased capacity for its routes from Japan to Korea and China by 50%.

Eukor Car Carriers (in which Hyundai-Kia owns 20%, and Wallenius Lines and Wilhelmsen the rest) has developed its terminal at the Port of Pyungtaek, South Korea to become a hub connecting South Korea, China, and Japan. Jan Eyvin Wang, the company’s CEO, anticipates the largest growth to come from emerging markets, particularly imports to China. Its growth enabled Eukor to establish weekly sailings from Europe to China. However, China’s auto exports are not yet as substantial as Eukor had expected, as Chinese vehicle production remains largely a domestic affair.

Wang also sees growth potential in the Middle East and India. Eukor has added a liner service from Asia to the Middle East and a direct service from Europe to Mumbai. It is also notable that Hyundai, which is expanding in India, is likely grow exports considerably from the country in the coming years, which will benefit Eukor as well. Kraass anticipates that WWL will handle vehicles from plant to dealer from India to North America as early as late 2010.

Russian headache
Not all of the BRIC markets are contributing to the rebound in global vehicle trade. Claude Guetin, from Gefco, the logistics subsidiary of PSA Peugeot-Citroen, observes that Russia – once booming for imports – is still not rebounding from its more than 50% decline.

Developed markets have also been slower to rebound. Sollie says that volumes from the Far East to Europe and North America, notably from Japan and Korea, tend to be the driver in the industry’s global trade systems. The challenge is to balance these routes with revenue in the return trades. Mature economies such as the US and Europe received a boost in volumes following their incentive programmes, which increased shipping demand (although not as much as might be expected, since excess capacity in the US and Europe led to a boost in local production). But there could be a payback for the shipping sector as well. “We are somewhat anxious about what car sales in these regions will be once the scrapping programmes expire,” says Wang. “The question is how long it will take before the real economy finds a clear recovery path with a sustainable increase in car sales.”

Short-sea outlook
The short-sea carrier industry in Europe is experiencing some different challenges compared to deep-sea, as they are more tied to their local markets than the global carriers. For some European short sea carriers the main growth could come from the mature markets, predicts Peter Kleberg, a director for automotive at DFDS Tor Line. “After everything fell flat last fall, the scrapping programs in Europe led to an increase in volumes that began in May. At the same time, volumes are less than half of what they were previously in St Petersburg [Russia]. However, small routes such as Sweden to Klaipeda [Lithuania] are bouncing back,” he reveals.

For UECC, the 2010 forecast is cautious. Bjørn Gran Svenningsen, the director of sales, predicts that for its main customers volumes for 2010 will remain roughly in line with 2009. He notes that in the first half of 2009, car and light commercial vehicle volumes dropped even more than sales figures suggested because carmakers reduced their inventory at ports of entry, import compounds, and retail dealerships. From August to October, UECC experienced some improvement in volume across Europe since production levels began to increase. However, Svenningsen is still cautious that the overall consumer downturn will continue at least another year. “We expect Russia to remain weak for some time. Although UECC has increased its frequency to the Baltic Sea region, volumes remain low and competition is intense,” says Svenningsen. 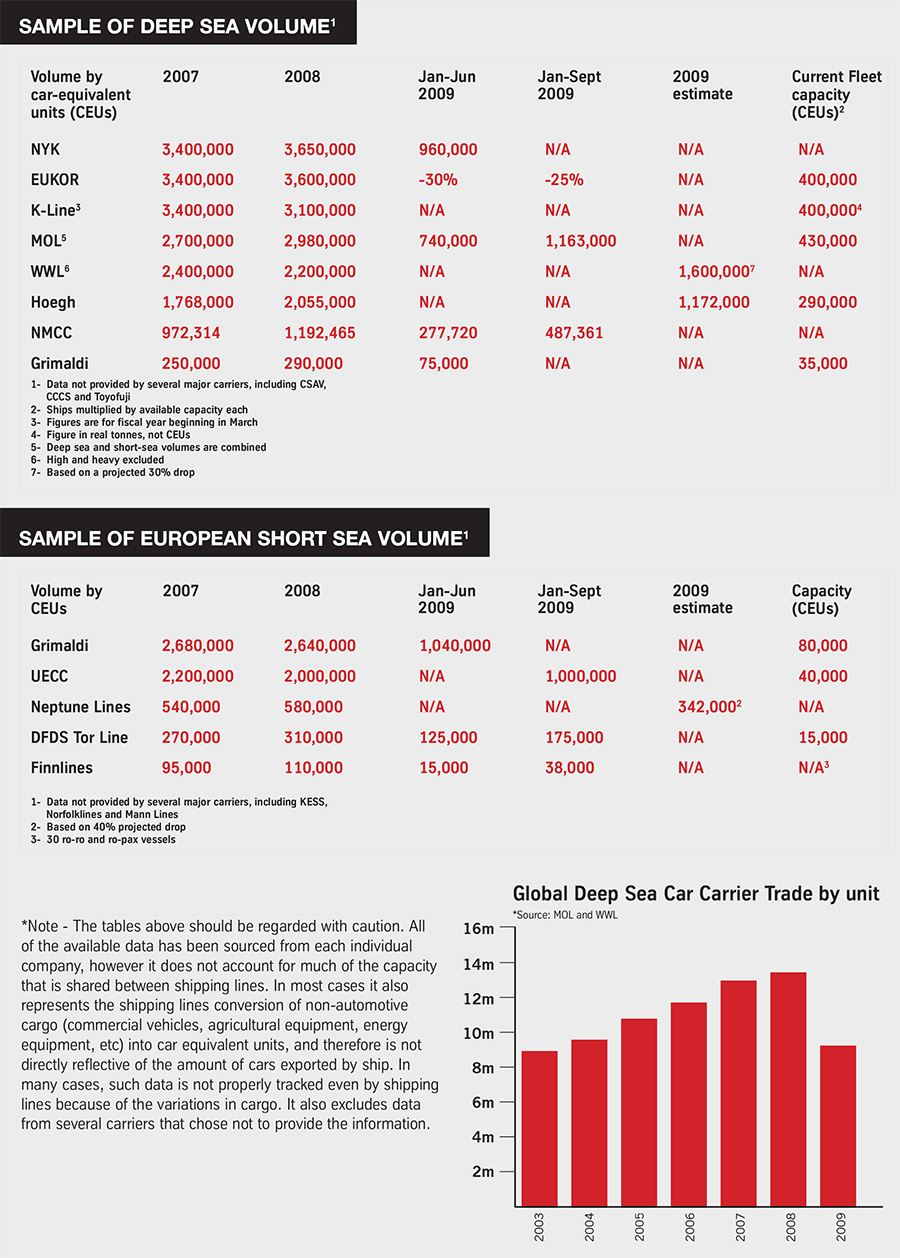 UECC has experienced major downturns elsewhere in Europe, and did not benefit much from high sales in Germany and France, since those markets rely less on short-sea shipping. Nevertheless, Kleberg says that for DFDS, Germany (mainly for its exports) and the UK are still the driving forces of its car business. It has also had increases in France. Svenningsen predicts growth on routes between northern Spain and Belgium, where in September UECC began a thrice weekly ferry service mixing containers with trade vehicles, machinery and high-and-heavy cargo. “One of our challenges as a pure car carrier is that there is not sufficient volume to cover the costs of a high frequency service. However, having access to a wider range of cargo types helps to support such a service and enables us to offer a cost effective alternative to land-based transport,” says Svenningsen. In the fourth quarter of 2009, competition from land and short-sea carriers became more intense, resulting in long-term effects on margins. “The problems that vehicle manufacturers will face when higher volumes return is that due to investment cutbacks, the European transport industry will have difficultly meeting the hitherto required service levels,” Svenningsen says.

For the time being, Kia is not experiencing capacity issues for its short-sea shipments. Kia ships its finished vehicles by land from its plant in Slovakia to Germany and then by short sea to the UK, using DFDS Tor Line. Ajwal says that Kia is able to manage lead-time and sailing frequency more effectively for short-sea shipments compared to deep-sea shipments because it is more likely to work with the ocean carrier directly.

Capacity conundrum
Across the board, the strategy for ocean carriers during the downturn has been to reduce capacity. For example, MOL reduced its service frequency and tonnage by laying-up and scrapping vessels. The downturn caused many vessels to become redundant for the first time in years. On the other hand, before the downturn began, DFDS Tor Line had planned to lengthen some vessels to increase capacity with roughly the same bunker. It did so by 20% on three vessels.

Guetin cautions that when vehicle volumes begin to increase, Gefco could face a lack of capacity because of cancelled orders or postponed deliveries of new vessels. But he predicts that by early 2010 this will be less of a problem as a slowdown in sales is likely after incentive programmes end. Gefco is facing its own problems from decreased ocean volumes. “Because some of our contracts require minimum volumes per vessel call, we had to pay for short shipment or we had to cancel some calls and increase transport leadtime. Although ocean carriers reduced their tariffs, it was insufficient due to our volume inducements,” reveals Guetin. With cost-reduction as a top priority for vehicle shippers, Guetin says that short-sea carriers have been facing fierce competition from road carriers in the past months, which have aggresively slashed rates to gain or maintain market share. But there is a sense that deep sea carriers have avoided cutting prices as much as road carriers have. “Our industry has had stable rates in relatively long contracts,” says Wang. “Thus we are not demanding skyrocketing rate developments in a tight market nor do we expect heavy drops in a slower market as opposed to the more spot-based commodity shipping markets.”

He adds that Eukor is nevertheless experiencing a downward pressure on freight rates while at the same time the costs of shipping are steadily increasing. In some cases, this may have led OEMs to switch mode. “Since short-sea volumes have declined, we switched to road going from Europe to Russia to remain on schedule; however, we plan to switch back once the volume increases,” says Guetin.

There have been some positives implications from the downturn. Mike Steck, vice president for supply chain management at Nissan North America, says that the recession has brought OEMs closer to the shipping lines. “The downturn has generated more collaboration between ocean carriers to achieve consistent service at competitive cost levels,” he says. Wang says that the downturn provided Eukor with breathing space in which to dispose of inefficient tonnage and clean up its fleet to be younger and stronger. It now has more opportunity to enter new trades and increase scheduling flexibility in existing trades. For Höegh Autoliners, Sollie says that the slack in capacity has given it the opportunity to focus on liner and project cargo, which further expands its cargo base.

Predicting the right balance
One of the problems that have remained during the downturn is the difficulty in anticipating accurate requirements for ocean capacity. Kraass says that achieving a solid forecast three months in advance is nearly impossible.

Deep-sea freight from Korea is the highest individual cost in Kia’s logistics chain, while timing is perhaps the most critical issue. Ajwal says that although Kia stays in contact with its ocean carrier, Eukor, car carriers from Korea take four to five weeks to reach the UK. A long lead time could therefore threaten sales, as under the scrappage system Kia has four months to fulfill an order from the time it is placed for it to qualify for the subsidy.

Ajwal says that Kia’s relationship with Eukor has helped during this period. The normal deep-sea frequency was two monthly shipments of 1,000 units or more at the beginning of the year. Since then it has increased to weekly shipments. “The challenge now is that deep sea carriers were packing up and mothballing very large vessels. Thus, physical capacity was constrained. If the market rebounds, we could experience a lack of tonnage and carriers could increase rates. “However, it would likely be toward the end of 2010 before deep-sea capacity constraints become an issue. The major markets in Europe are still depressed,” says Ajwal.