Global conference: Ford is buying more boxes ‘off the shelf’ 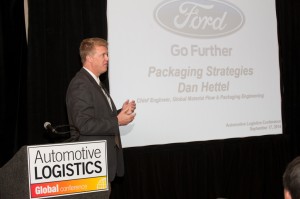 Ford Motor Company is making a global push to reduce the amount of specialised, bespoke racking and packaging that it uses to move components and parts, in favour of more ‘off the shelf’, standard equipment. The carmaker is also looking to take more ownership of containers and racks, rather than using equipment owned by suppliers or third parties.

“We have too many specially designed containers,” said Hettel, referring to the special equipment that the carmaker designs and purchases to move certain equipment, ranging from accessories to powertrains. “They work great, but we are looking at what we can do to move towards ‘off the shelf’ packages that are lower cost.”

Hettel said that Ford was moving towards a number of strategies to achieve this, including designating a standard packaging type for each commodity. While some part packages will need variation because of local trucking standards, Hettel said that the equipment would be modular and scalable based on different requirements.

In one recent example for trim material, Ford switched from a special rack that was 96 inches (244cm) high to a standard pallet box that was only 34 inches high but improved cube utilisation by 87%.

Ford is also adjusting its packaging to improve line-side presentation, including a move towards smaller boxes and kitting. “Kitting is a big initiative as it cleans up the line side, and helps standardise our packaging,” he said.

Michael Silvio, director of supply chain management at tier supplier Cooper Standard, commented that Ford’s move towards kitting and smaller lot packaging was also beneficial to tier suppliers. “Kitting and small containers help the tier ones too since we are making the part,” he said.

Hettel revealed that Ford would like to move towards a model where it owns its standard and specialised packaging. “I don’t own all of the packaging yet, but we are working towards that,” he said. “We want to reduce the new investment and maximise return for our investment dollar. One way to do that is to buy more standardised boxes, then look to bundle together to leverage our scale.”

“We don’t want to do that but that is what happens when you can’t keep up with growth,” she said.