During the Automotive Logistics Global conference in Detroit, executives in finished vehicle logistics looked back at the impact of the ‘polar vortex’, which hit North America last winter, leading to wide-scale transport disruptions. Some tough lessons were learned, not least by the rail sector, about how to avoid the same problems again. 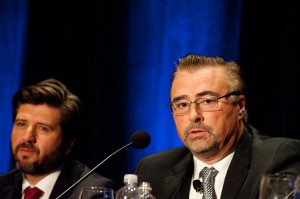 Jack Cooper's Alex Meza and BNSF's Dave Fleenor agreed that railway and trucking companies could work better together
Representatives from road, rail and the OEMs all said that collaboration was the key. “You can never have too many friends in a crisis,” said Brian Mason, national manager of strategic planning at Toyota. “The problems we had last winter were not something we could fix alone.”

Toyota said that the number one thing it is focusing on is providing accurate forecasts over longer periods, such as “the next two years, not the next two weeks”. Mason said that Toyota had taken the time to build tracking tools that would more accurately predict future situations. The OEM’s logistics team now participates in a daily operations conference call, and has contingency plans including short- and long-term alternatives to rail shipping at impacted locations. Mason was keen to stress that he was not advocating wholesale movement from rail to truck, but that preparation for all weather situations is important, including preparation for the possibility of disruption to rail.

For the railroads, that is exactly what happened. The bad weather hit velocity, led to a railcar shortage, as well as causing congestion. It also coincided with a surge in certain commodities and energy cargo by rail. Dave Fleenor, assistant vice-president for automotive at BNSF stressed that the company was committed to improving the service in the wake of the winter chaos. Although automotive only accounts for 2% of BNSF’s revenue, the company spent over $600m on the sector last year. Moving forward, BNSF is committed to focusing its attention on improving service during the winter, and spending 25% more capital on contingencies, and 10% on locomotives.

In 2015, the railway is also adding 160 miles (250km) of double track in North Dakota to help speed movements there. It has expanded a rail yard for automotive in Colorado, while in Kansas City, BNSF is doubling auto switching capacity to 33,000ft (10,000 metres).

Work together, not against each other

Mason suggested that in a crisis, OEMs and suppliers should establish an escalation process, notifying a vice-president or senior vice-president that disruption was likely to hit the supply chain.

He said it was also necessary to review storage capacity in the event of bad weather, which Toyota calls ‘proactive mitigation’.

“The biggest thing we are proud of this year is that we did not close a plant. We came close, but we didn’t want to constrain production.”

Mason said there needs to be a long-term action plan, involving working closely with rail partners, continuing to work with industry groups, implementing a higher percentage of long-term highway transport where necessary, and making the shift to longer-term highway transport contracts so as to negotiate competitive rates and provide incentives for trucking companies.

Alex Meza, chief commercial officer at transport provider Jack Cooper, said it should not be seen as controversial to get competing OEMs sat down together to collaborate on contingencies. Nathan Lawson, intercontinental logistics manager, at General Motors, agreed and said that the company needed to focus more on working with both providers and competitors on working together during such crises.

That approach to collaboration may soon be put to the test as the coming winter is set to be another cold one. Jack Cooper is proposing an improvement in its own trucking capacity by lobbying for the weight and length law to increase its capacity by 12-13%. The trucking sector is hoping to gain capacity for one more vehicle per truck by extending lengths by 5ft to a total 80ft length (24.4 metres), and by increases its weight allowance by 8,000 pounds (3.6 tonnes). “We don’t think we’re asking for that much,” said Meza. “There are 3.5m trucks on the road, and just 12,000 trucks would be impacted, which is only 0.29% of the total.”

Overall delegates agreed that flexibility, planning, and contingency plans are important, across the modes, and they would be better prepared for another harsh winter by working together. Mason concluded: “From Toyota’s perspective, we don’t see contingency as a necessary evil, we see it as a necessary best practice.”