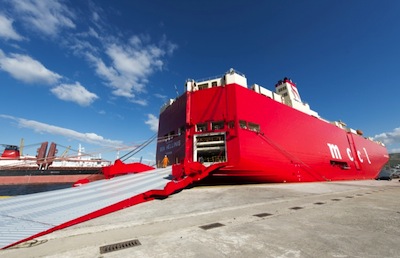 Hyundai Glovis’s division in Europe has begun using a short-sea route from Slovenia to Spain for the export of vehicles made at Hyundai-Kia’s production plants in the Czech Republic and Slovakia.

Previously the logistics provider moved the volumes, which add up to 50,000 vehicles a year, over land. Following a trial service last year, however, the company is moving the vehicles on a multimodal route that uses short sea between the Slovenian port of Koper and the Spanish port of Tarragona. That service has been increased since January.

At the same time, the Hyundai Group has signed a new five-year contract with Bergé Infraestructuras y Servicios Logisticos (Bergé) in Tarragona for the handling of the volumes through the Spanish port.

Glovis Europe said the switch to regular flows using land and short-sea had been designed to cope with expected volume increases between Europe and Spain.

The port of Koper’s terminal operator – Luka Koper – has recently expanded the storage area at its ro-ro terminal by 16,000 sq.m to accommodate an additional 780 units.

Talking about the Hyundai-Kia throughput, a spokesperson for the port operator said the weekly service had produced good results since it was established last year, which was why cargo levels were being increased this year. The majority of vehicles are delivered into the terminal by rail.

“Regarding the expansion of storage facilities for cars, we are working on that constantly because the volumes are increasing and because of potential new businesses we are working on,” added the spokesperson for Luka Koper.

In 2015, the ro-ro terminal at the port of Koper managed a throughput of 607,326 vehicles. It also recorded a total throughput of 790,736 TEUs, making its container terminal the largest in the Adriatic.

Meanwhile, in Spain, Bergé has requested an expansion of its operating area at the port of Tarragona by some 35,000 sq.m. Currently, its various operating divisions have 120,000 sq.m of terminal area, which allows it to handle up to 6,500 finished vehicles at any one time. There is also a further 380,000 sq.m area where 18,000 units can be stored.

In terms of organisation, Carport Tarragona undertakes import and export duties as well as vehicle storage, while Bergé Automotive Logistics undertakes storage, inspection, pre-installation and terrestrial dispatch of vehicles from the port.

Bergé Carport is equipped with five ro-ro ramps and operates 1,600 metres of linear quay, allowing Tarragona to function as an effective hub for the distribution of vehicles to North Africa and countries across the Mediterranean.