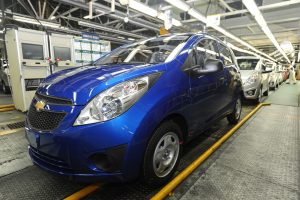 General Motors has announced that it will develop a new range of small cars featuring high levels of technology, in partnership with China’s Shanghai Automotive Industry Corporation (SAIC). The new cars, based on a common architecture, will be built and sold under the Chevrolet brand in China, Brazil, India, Mexico and other emerging markets.

The move is part of a $5 billion investment (with an undisclosed extra amount from SAIC) aimed at boosting the Chevrolet brand and emerging market sales. As part of the strategy, GM has also announced a $1 billion investment in Indian production, which include the consolidation of production at its plant in Talegaon in Maharashtra states, and the closure of its second plant in Halol, Gujarat.

The new GM-SAIC cars are expected to be in production by 2019. GM president Dan Ammann said he expects sales of the new vehicles to account for more than 2m units a year eventually.

The new architecture GM plans to develop is expected to replace several current and unrelated vehicle lines sold overseas, and follows GM’s efforts to produce the majority of its vehicles from four vehicle sets by 2025. The new architecture will help to tie the supply chain between emerging markets. It will be the first time GM develops a platform with SAIC, its long-time joint venture partner in China.

The OEM hopes that the investment programme will vastly increase its sales and allow it to get ahead of competitors in markets that will be driving a significant proportion of the global growth of vehicle sales over the coming years. There are no plans to export any of the vehicles to the US or Europe.

The investments for Chevrolet production, while not fully spelled out, appear not to include GM Korea. South Korea has traditionally been GM's global hub for Chevrolet and small cars, but has seen reductions in output and investment following rising costs and labour disputes (read more here).

GM has said that $1 billion of the $5 billion commitment will be invested in India, and the investment is expected to bring 12,000 new jobs to the country. Mary Barra, chief executive officer, GM, said that ten new locally-produced vehicles will be rolled-out over the next five years, beginning with the Trailblazer in October 2015.

Most of the investment will be spent developing Chevrolet’s Talegaon manufacturing base in Maharashtra. The plant currently has a capacity of 130,000 units, and this will increase to 220,000 by 2025.  More than 30% of its annual production is planned for export to markets outside of India. However, while GM plans to expand the Talegaon plant, it has announced that Chevrolet will cease production at the Haloi facility in Gujarat by the second half of 2016.

GM India president and managing director Arvind Saxena said, “Consolidating our manufacturing in a single location in India will support the long-term sustainability of our business in a challenging emerging market. This is not a decision that we are making lightly and we are committed to treating those impacted respectfully.”

While the focus in the past may have been on simple or basic small cars for emerging markets, both consumers and regulators are demanding an increasing amount of technology in vehicles, which is leading to OEMs taking note and altering their strategies. It is no longer the case that the consumers of emerging markets are happy to have a stripped-down version of a Western car. Consumers now want connectivity, safety technology and good fuel economy at a price they can afford.

With the volume of cars expected, GM hopes that it will be able to produce high-tech cars at an affordable price, while still generating a profit. The new models will be produced in existing plants that will be retooled.