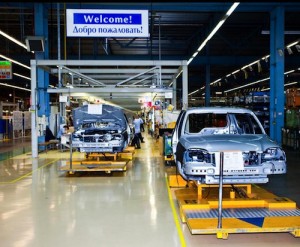 General Motors will increase the export of vehicles from its joint venture with Russian carmaker AvtoVaz by 25% in 2014, according to the management of the company. Annual volumes of the Chevrolet Niva, made at the Togliatti plant, for delivery to foreign markets will now be increased to 5,000 units, from the 4,000 produced last year. The plant has been making the model, which is based on the Lada Niva, since 2002.

GM-Avtovaz intends to create a new model of Chevrolet Niva as well as expand complete knockdown (CKD) capacity in Russia.

The joint venture has begun to build new production facilities for assembly of the next generation Niva at the Togliatti site, with an investment of $209m. Start of full production is planned for December 2015, with annual capacity put at 120,000. The new production site will include a dedicated logistic facility for the new model.

"The increase in exports of Chevrolet Niva will be supported by the common customs union with Kazakhstan and Belarus,” said GM’s Russian division in a statement. “In particular during 2013 this union affected the growth of the automotive market in Kazakhstan and, in general, had a favorable impact on the volume of deliveries to the countries of the Eurasia Custom Union (Russia, Belarus and Kazakhstan). There is also stability in the development of exports to Ukraine and Azerbaijan."

So far Chevrolet Niva cars are exported to nine countries: Armenia, Azerbaijan, Belarus, Georgia, Kazakhstan, Kyrgyzstan, Moldova, Uzbekistan and Ukraine. The largest foreign sales market in 2013 was Kazakhstan, which accounted for 72% of exports.

A prototype for the new generation Chevrolet Niva is scheduled for March 2014, which will be premiered at the Moscow motor show this year. Italian design company Blue Engineering is engaged in the development of the prototype.

GM is reported to be expanding its CKD capabilities in Russia to produce both old and new versions of the Niva and is forecasting high demand for the new model across a wider market. The company said it expects to launch exports both within and beyond the Commonwealth of Independent States (CIS). Target markets include Mongolia, North Africa and the Middle East.