General Motors’ top purchasing executive, Grace Lieblein, has revealed specific plans to reduce logistics costs for its plants in North America, including bringing suppliers and stamping operations closer to plants, extending rail lines and investing in logistics centres. The plans are part of a company objective of reducing material and logistics costs by $1 billion by 2016, and appear to confirm an on-going strategy objective for GM’s logistics team in North America.

In an interview with The Detroit News, Lieblein, GM’s vice-president of global purchasing and supply chain, revealed that the company was looking closely at how it could reduce its logistics spend, which was estimated to be around $8 billion, including customs, inbound, outbound and spare parts logistics.

Lieblein pointed to the possibility of adding more logistics centres close to assembly plants to sequence parts, including a new one planned near GM’s Lansing Grand River assembly plant, near Detroit. She also said that the company wanted to encourage tier suppliers to move closer to some plants, including those in Missouri and Texas.

A trim supplier that located production close to Kansas City, for example, is expected to save $66m over the course of the manufacturing life of the 2014 Malibu. A similar example was given to a supplier that moved manufacturing from Michigan closer to GM’s plant in Oshawa, Ontario.

According to a GM official quoted in the The Detroit News, GM will also save money by extending rail lines to plants. GM was quoted as saying it would spend $3m to extend a rail line 300 yards closer to its Detroit-Hamtramck plant. It expects to save $7m in transport costs over three years with the change.

The official also said that GM would save $7m by trucking vehicles directly from Oshawa to Detroit, rather than sending the vehicles first by rail and then loading them onto a truck.

The plans that Lieblein described are aligned with the company’s strategy objectives in logistics for at least the past year. In a major interview with Automotive Logistics at the end of 2012, GM’s former head of global logistics, Christine Krathwohl, described how logistics was going to have a stronger say in influencing mor 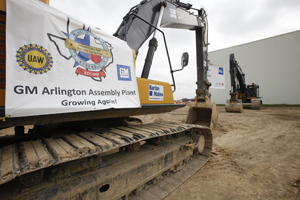 GM is bringing stampings closer to some plants to save on logistics costs
e local sourcing and manufacturing decisions. She pointed to a decision in 2012 to build a metal stamping plant next its plant in Arlington, Texas. Prior to that, metal stampings had been shipped to the plant from as far away as 1,000 miles (1,600km).

However, the strategy for logistics appears not to have changed, with a mandate for reducing supplier distances and using logistics as an important consideration in sourcing and supply chain decisions. Earlier this year, GM announced that it aimed to reduce $1 billion in material and logistics costs by 2016.

Jeff Morrison, who had been director of North American inbound logistics before switching roles with Swiss, recently told Automotive Logistics that studying opportunities for ‘near-shoring’ was one of the main focuses for GM’s North American logistics teams.

Lieblein’s recent remarks appear to confirm this strategy: “We tended to treat logistics in the past like the result of a number of different variables, key variables to a decision,” she told The Detroit News. “And what popped out was the logistics cost… We are including logistics as one of the key variables as we look at supplier footprint, manufacturing footprint, etc.”