Grappling with the capacity crunch 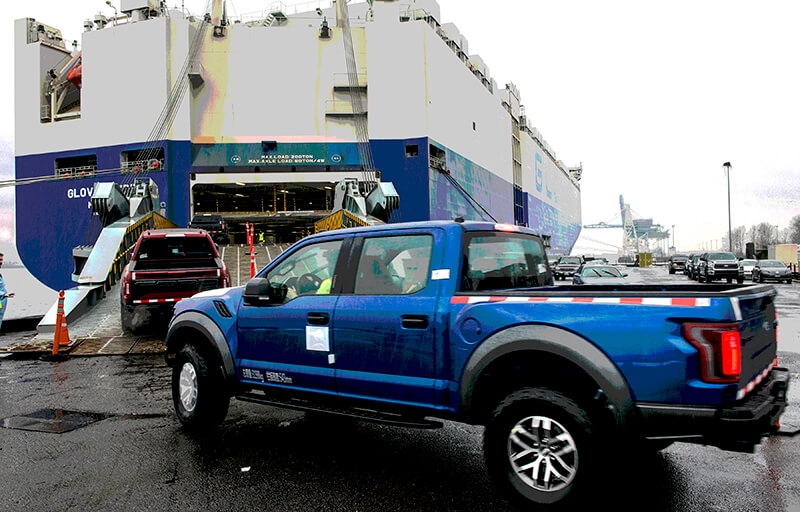 With demand for automotive exports via North American ports rising again last year, OEMs face a number of new challenges in handling vehicles in 2018. With capacity already strained at many hubs, the threat of increased regulatory restrictions on trade is adding further uncertainty for manufacturers moving forward.

Congestion continues to be a major concern at many ports at capacity, both in terms of shipping and landside storage, and as a result the operating environment for automotive logistics is increasingly difficult at many sites.

On top of this, uncertainty over Nafta renegotiations as well as international sanctions from the US on steel and other core commodities for the sector threaten to delay key investment decisions on promised infrastructure upgrades.

Despite this, imports and exports mainly grew at low single-digit rates year-on-year in 2017, painting an overall positive picture for North American port volumes as OEMs focused on growing US and Mexican operations.

US powers North American exportsThe US market remained the largest driver for North American vehicle exports in 2017, with several manufacturers aiming to further increase global exports from their US operations this year.

VW Group was among those planning to increase exports via its key export ports of Brunswick, Georgia, and Jacksonville, Florida.

“We export to Mexico and Canada primarily, but also to the Middle East and South Korea. We also ship a very small number to some Caribbean island nations and are looking to expand the export book of business,” says Mark Boucher, director of vehicle logistics, Volkswagen Group of America. 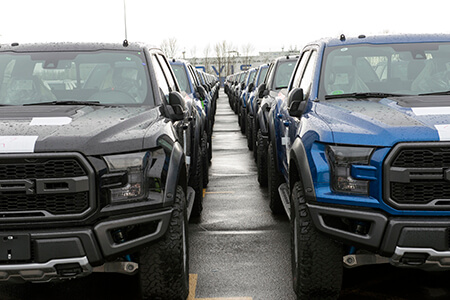 Overall, around 45% of US vehicle exports were within the Nafta region in 2017, with “virtually all” destined for Canada, according to Tom Ossieur, associate consultant at research agency Drewry.

For the remaining 55%, Europe and Asia accounted for approximately 15% each, with growth largely focused on new shipments to Asia. Within Asia, it was exports to China that drove the majority of growth, with demand for SUVs being particularly strong.

“In absolute numbers, the largest volume growth was to Asia [but] US exports also benefitted from Australia closing its last operational vehicle manufacturing plant,” says Ossieur.

Honda bucked this trend last year, sending the largest number of its exported vehicles – 28,600 – to the Africa and Middle East region, followed by Mexico with over 24,400 units, and then Korea, Latin America and Puerto Rico.

“The ports of Jacksonville and Brunswick were key export routes for Honda,” says Charles Franklin II, manager of export logistics at American Honda Motor, adding that the ports of Hueneme and Baltimore are becoming additional hubs for the firm as it seeks to grow its US operations.

Likewise, Toyota also indicates a desire to expand US export operations as it tries to build on export growth of 2% last year.

“We are well on our way to establishing the US as a global export hub. In 2017, exports totalled 140,680 vehicles from the US to 31 countries,” says a spokesperson for Toyota Motor North America.

Daimler, similarly, sees rising demand for US exports, with activity focused around its manufacturing plants in Alabama.

“Our plant in Alabama is producing the GLE, GLE Coupe and GLS for the world market. The plant in Tuscaloosa also builds the C-class Sedan for North America,” says a spokesperson for the carmaker. “Our plant in Charleston is assembling the Sprinter and Metris vans for North America (US and Canada). All other models sold in the US are being built at Daimler’s other plants in the rest of the world.”

"Congestion would have to be the biggest issue, with many OEMs having many vehicles in the ports… There is only so much port space. Many OEMs are required to use offsite locations and supplementary storage." - Mark Boucher, Volkswagen Group of America

Nafta importsOn the import side in the US, OEMs also saw positive growth last year, with Nafta trade accounting for roughly 51% of vehicle imports and Asia accounting for a further 34%.

Customs data suggests that overall, US imports rose 2% year-on-year in 2017, coming mainly from Mexico (30%), Canada (21%), Japan (20%) and Germany (6%). Across the top five countries of origin for US imports, however, only Mexico recorded any growth last year, increasing numbers by 14%.

In terms of import routes, VW Group highlights the ports of San Diego and Benicia in California, Houston in Texas, Jacksonville in Florida and Davisville in Rhode Island as the key handling ports, with around 513,000 VW and Audi vehicles imported to the US during 2017. As with exports, VW reports congestion at these ports as a key difficulty.

[mpu_ad]“Congestion would have to be the biggest issue, with many OEMs having many vehicles in the ports… There is only so much port space. Many OEMs are required to use offsite locations and supplementary storage,” Boucher confirms.

Tackling congestion with technologyConcern over congestion at US ports is echoed by nearly all the the leading OEMs operating in North America, with problems stemming from both ocean and landside operations.

On the ocean side, manufacturers report increased pressure on shipping routes, under-capacity of vessels, limited slots for docking at ports and increased competition from other forms of cargo.

“We have seen some capacity constraints from the shipping lines as opposed to the ports, with increased inbound volumes to support solid sales volumes,” says a spokesperson for Daimler.

“We have seen port congestion [and] had one port decline new business,” a spokesperson for Honda says. “There are capacity constraints and erratic vessel schedules, some due to port congestion.”

On the land side, limited storage space for vehicles continues to cause bottlenecks for manufacturers at many ports. This is often coupled with poor intermodal links to and from the ports, making efficient movement of stock more difficult.

Manufacturers are taking various steps to tackle this, including the use of the latest technology to improve visibility. Honda reports it is currently implementing software that promises to optimise port flows “dramatically”, while Daimler says new automatic gate systems at terminals in Charleston, South Carolina, have proved to be “a valuable resource” in improving turnaround times for truckers. 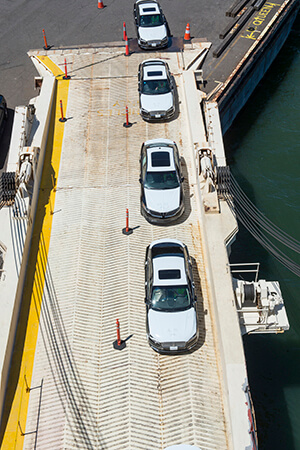 “Automotive rail service in North America is, in general, poor and needs improvement,” says Boucher. “The eastern US rail service in particular has been problematic for several years now [and] elongated transit times and inability to provide equipment on a satisfactory basis exacerbates port congestion and operation.”

Volkswagen faces its own unique issues relating to congestion, following a US court settlement last year that resulted in owners of vehicles deemed to contravene emissions standards being given the option to sell their vehicles back to VW – something that has created additional storage problems for the group. In response, Volkswagen Group has contracted multiple storage facilities in the US to cope with extra demand.

“These vehicles are being stored on an interim basis and routinely maintained in a manner to ensure their long-term operability and quality, so that they may be returned to commerce or exported, once US regulators approve appropriate emissions modifications,” says a spokesperson for VW Group. “Vehicles that are not modified because of their age or condition or for other reasons will be responsibly recycled, in accordance with the terms of Volkswagen’s settlements with US environmental authorities and other parties.”

Rising sizes reshape trade flowsSize is another key issue for many OEMs, as demand grows both for bigger vessels and vehicles. On the vessel side, the trend towards larger, Post-Panamax vessels at ports around the world has caused many OEMs to reconsider trade flows.

“It is interesting to note that, for the six months up to March 31 2018, 379 Panamax beam car carriers have crossed the Panama Canal and 18 wide beam, versus 779 and 22 respectively for the whole of 2017. This clearly shows that operators are taking advantage of the possibilities offered by the enlarged locks connecting the Far East and European exporters to both east coast and west coast North American ports,” Ossieur from Drewry explains.

With an increasing focus on consolidation around mega-ports, many shippers are now moving to larger capacity vessels, but some manufacturers still see opportunity at smaller ports where competition for space may be less intense.

“While we subscribe to a coastal anchor port strategy in North America, we’re finding that smaller and non-traditional ports are competitive and offering the efficiencies, flexibility and innovations needed to further support our business,” says a spokesperson for Fiat Chrysler Automobiles (FCA)

On the vehicle side, a trend towards larger sports utility vehicles (SUVs) continues to create some issues for OEMs in terms of reconfiguring both storage and deck space for transport.

Overall, in terms of vehicle type, passenger car exports were essentially flat across the US in 2017 but commercial vehicle exports increased by 9% year-on-year as SUVs increased in popularity, according to customs figures.

Daimler is one of the major OEMs reporting a greater focus on US SUV exports, with its Alabama plant now exporting “about two thirds” of the SUVs built there to “almost every country in the world”.

Fiat Chrysler also highlights a need to work with a variety of ports to meet “growing import and export needs” for its Jeep brand globally.

Nafta disruptionGiven the prominence of intra-Nafta trade for the North American region, the ongoing re-negotiation of the treaty remains of significant concern for manufacturers, with even the largest groups forced to watch from the sidelines and pray that swingeing tariffs are not enacted.

Volkswagen Group is representative in calling for policymakers to come “to an agreement to maintain free and fair trade across the region” and avoid “termination of Nafta or adoption of trade restrictive changes” which would impair the firm’s long-term investments in the US, Mexico and Canada.

In light of the recent brinksmanship displayed by the Trump presidency, however, all bets appear to be off as to the ultimate outcome, and as a result, this is adding uncertainty to forecasts for investment and growth.

[related_topics align="right" border="yes"]“Prosperity in the US and Europe is to a great extent the result of free trade. In our view, Nafta, for example, is a win-win arrangement, with enormous benefits for both the United States and the other countries. In that respect, we are following the Nafta negotiations very closely,” a spokesperson for Daimler says.

The Mexican industry, in particular, is susceptible to this uncertainty, given its starting point from a lower baseline in many areas. Investment confidence there is clearly critical to ensuring additional port capacity is developed in time to meet demand.

“As Mexico’s economy continues to grow, consumer demand will increase. However, logistics infrastructure is [already] at or beyond capacity with a very-slow-at-best catch-up plan. This will continue and be worse over the next couple of years,” predicts Honda.

"As Mexico’s economy continues to grow, consumer demand will increase. However, logistics infrastructure is [already] at or beyond capacity with a very-slow-at-best catch-up plan. This will continue and be worse over the next couple of years." - Spokesperson, Honda

Developments at ports in North America will be central to discussions at the forthcoming Finished Vehicle Logistics Import Export summit in Baltimore, which takes place on August 7-8