Groupe CAT in talks to buy STVA from France's SNCF 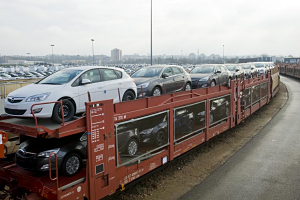 Transport and logistics provider Groupe CAT has entered into exclusive negotiations to purchase the STVA Group from French state-owned rail company, SNCF, for an undisclosed amount.

If successful, the deal would give CAT one of Europe’s largest bimodal finished vehicle logistics fleets and add a proforma €312m ($340m) to its 2016 turnover of €1.2 billion.

Last year, STVA delivered 2.8m new and used vehicles by road and by rail. The ECG 2016/17 Survey of Vehicle Logistics in Europe shows that the company also owned 725 trucks, 2,700 wagons, 31 inland compounds and 4 port compounds in 2015.

According to the SNCF annual report for 2016, the company made an operating profit of €6m, up from €1m in the previous year, on revenues of €298m. The division contributed just 1% to SNCF’s overall revenues of €32.3 billion in 2016.

The annual report refers to a renewal of contracts with Porsche and Mercedes as key milestones achieved by STVA in 2016.

In the year ahead, diversification of the portfolio was predicted given the takeover of the Renault distribution contract in Germany and the outlook for further contracts.

Alejandro Forbes, CEO of Groupe CAT, said the potential acquisition was an “excellent opportunity for Groupe CAT to materialise and strengthen its process of external growth”.

The latest news follows several other Groupe CAT acquisitions in the past few years, including last month’s acquisition of the 50% in UK firm Carlson Vehicle Transfer (CVT) that it did not already own for an undisclosed sum.

Other recent purchases include that of Spanish firm, Sintax Logistica, as well as those of Toquero in Spain, TRIAL in France, and Fleetpoint in the Netherlands. The firm also bought WWL out of the previously jointly owned Vehicle Services Europe in Germany.