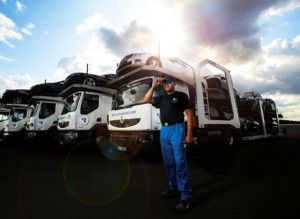 At Batilly centre, which is close to a Renault plant, CAT now has one of the most extensive anti-hail logistics parks in Europe. The anti-hail system covers 2,500 spaces, the equivalent of seven football pitches.

CAT has previously installed anti-hail netting areas at Le Havre in France, as well as in Slovenia, Turkey, Italy and other European locations. The investment in the system is not entirely linked to high incidents of hail, however. “There’s no specific hail problem in Batilly. This compound was indeed selected [even] as statistics showed us that the hail level was low,” a spokesperson for Groupe CAT told Automotive Logistics. “But each time it is possible, and on each wide compound, we fit the lots with hail net or photovoltaic panels in order to secure vehicles, as part of our service level agreement commitment [with customers].”

Along with expanding its weather defences, CAT is also expanding its logistics centre. The extension of the Batilly park has recently begun and will enable 7,000 additional spaces intended for new logistics flows. Construction of a second workshop that will double the production capacity of the CAT centre will begin at the end of 2014.

CAT is not the only company in the area to take precautions against the weather. In 2012, Renault installed a large photovoltaic installation at its plant nearby in Batilly. While the installation provides power, it also doubles as a protective carport for vehicles. Renault said at the time, “The initiative is also an innovative way of protecting new vehicles before delivery to the sales network because it limits storm damage. The panels are designed to resist impact and hail in particular.”

France may not be the first country you think of when it comes to hail, but in 2012 a hailstorm destroyed nearly 6,000 hectares of vineyards in the southeast of the country, and in 2009, a hailstorm hit Toulouse, with hailstones big enough to pierce through car bodies.