Höegh Autoliners settles with US authorities after cartel investigation 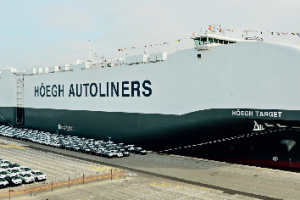 Shipping company Höegh Autoliners has agreed a settlement with the US Department of Justice (DOJ) after a price-fixing investigation dating back five years.

The company has agreed to pay $21m in fines related to exports from the US to the Middle East, following the DOJ’s investigation into the car carrier industry and ocean shipping services to and from the US over the period from 2001 to 2012. The investigation, which began in September 2012, included several other shipping companies.

“Höegh Autoliners takes the Department of Justice’s conclusion very seriously, and we deeply regret the incidents occurred”, said Leif Høegh, chairman of Höegh Autoliners. “We would like to extend our sincere apologies to customers, personnel and other stakeholders. Höegh Autoliners is committed to fair and lawful business practice. Actions have been taken to strengthen our efforts to meet the highest ethical standards and we will continue to reinforce our compliance activities throughout our organisation.”

In a separate development, Höegh Autoliners was referred earlier this month to South Africa’s Competition Tribunal for charges relating to collusive tendering, price-fixing and market division in the transport of motor vehicles, equipment and machinery for import and export from the country.

Höegh Autoliners’ US fine is just one of many to have hit the global ro-ro-shipping market lately after a string of investigations into cartel-related activity worldwide.

In July last year, for example, WWL became the fourth car carrier confirmed to be fined by the US Department of Justice in relation to price-fixing on international ro-ro services between 2000 and 2009, agreeing to pay out almost $100m.

In June this year, Mexico’s Federal Economic Competition Commission (Cofece) issued seven ro-ro carriers with fines totalling 581.6m pesos ($32.4m), saying they acted as a cartel to increase prices over the period between 2009 and 2012.