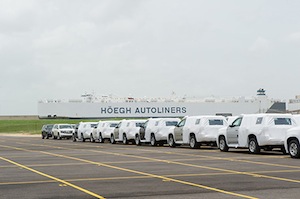 Höegh Autoliners and the Sola family, the owners of SC Line and Fast Terminal International, have signed a memorandum of understanding to strengthen both ro-ro and breakbulk services between the United States, Mexico, the Caribbean, Panama, Colombia and Venezuela.

Höegh is expected to buy the ocean service operated by SC Line out of Port Everglades and Mexico, which calls at a wide range of ports across the area. Port Everglades is looking primarily to be a location for vehicle and high-and-heavy exports to Central America, the Caribbean, Colombia and Mexico.

This service will combine with Höegh’s current regional operation, via a hub in Kingston, Jamaica. These services will then connect with Höegh’s deep-sea network to and from the region, creating a global reach. SC Lines’ offices in Panama and Miami will manage the regional service.

The Höegh Masan and Höegh Inchon (both of which have 4,200-CEU capacity) are being positioned in the region. The first vessel loaded in Port Everglades on January 19th, with subsequent voyages every 15 days. These two vessels add to the one that Höegh is currently running in the Caribbean. This does not seem to be a major move towards Mexican short-sea exports to the US, but rather short-sea ro-ro shipping in the region more widely.

Höegh is, however, still developing in Mexico. Last year, the company shipped 170,000 cars in and out of Mexico, and 2,000 tonnes of project cargo. Last autumn, Hoegh switched to a new shipping agent, Norton Lilly, which is part of the Trafimar Group.