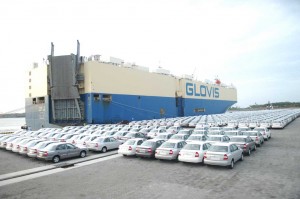 In the first quarter of this year alone, the facility handled more than 41,000 transshipped units, which he said was a remarkable achievement given the short amount of time the port has been in operation.

He predicts that around 100,000 units will have been handled by the end of the year.

"The majority of vehicle importers are of the view that this move (to the port) has helped facilitate faster clearance whilst bringing cost savings into their operational overheads," he noted

The port is being financed by Chinese investors and once the second development phase is inaugurated - also being bankrolled by the Chinese - it will outstrip Colombo as Sri Lanka's biggest port, from where much of the existing automotive traffic has been diverted because of the long berth delays at the rival port.

Car carriers can often wait up to 10 days in the outer harbour prior to being handled at Colombo, which in turn has driven up the price of imported vehicles (read more here).