Healthier times ahead for Europe 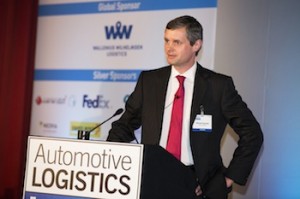 European vehicle production is heading towards higher capacity utilisation as factories close, models are localised and the new vehicle sales market finally starts to recover, according to PwC Autofacts. Continued growth in exports as well as complex material flows should also benefit automotive logistics providers, although the European market may never return to its former sales peak.

Speaking at the Automotive Logistics Europe conference in Bonn, Michael Gartside (pictured), senior manager of the Autofacts strategy group, predicted that plant capacity utilisation in the European Union would improve to above 80% by 2016, and approach its pre-recession level of 85% by 2017, up from current levels of about 75% and a low of 70% in 2009. Plants are generally considered to be profitable at utilisation rates of around 80%.

Gartside pointed to several significant factory closures, including PSA’s plant in Aulnay, France last year; Ford’s plank in Genk, Belgium this year; and the end of production at Bochum, Germany next year. “Plant capacity will be reduced by around 650,000 with plant closures,” said Gartside.

At the same time, Gartside cited several new models and production localisation products that should increase production volume by around 550,000 units. Specific models that will come to Europe over the coming years include the Fiat 500, which had been produced both in Poland for the European market and in Mexico for the North American market but will now be concentrated in Poland; the Nissan Micra, which will be supplied from a Renault factory in France for the continental market, rather than India; a new sports crossover Jaguar model, along with higher Land Rover production in the UK; and a new Suzuki compact SUV that will be built in Hungary.

“Assembly growth is driven by EU demand and localisation of production, which is mostly a positive development for logistics,” said Gartside.

This recovery is supported in part by an anticipated return to growth in the EU, plus Iceland, Liechtenstein, Norway and Switzerland, following six consecutive years of decline. Sales are expected to rise around 4-5% this year to 12.6m, and rise steadily over the coming years to around 14m units in 2016 and 15m by 2019. Sales growth will be uneven across the continent, although growth is expected even in hard hit southern European markets such as Italy and Spain.

Gartside, however, does not anticipate that the European market will again reach the 16m units sold in 2007, as the region grapples with a stagnating and ageing population, increased cost of vehicle ownership, longer replacement cycles as well as falling interest in car ownership among young consumers. Gartside suggested that Europe is already facing “peak demand”.

“We don’t believe that 16m will ever be achieved again in the European market,” he said.

European exports to other regions are expected to remain stable, although growth is expected to slow as more products are localised in North America and China, for example. “The export surplus in Europe will likely reduce over time,” he said.