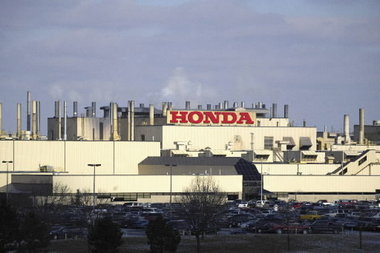 This article has been amended since publication on 26th February to include additional comment from Dennis Manns, Honda’s vice president of logistics and sales planning.

Honda unveiled the latest development in its expansion projects for Mexico last Friday (February 21st) with the opening of its new $800m plant in Celaya. Volumes are aimed at both the Mexican and US markets, with flexibility built into transport routes north, including rail and ocean.

The plant, which lies in the central Mexican state of Guanajuato, is expected to produce 200,000 units per year. Honda will be producing the Fit hatchback, in addition to an as-yet unnamed compact sports car.

For the Fit, production is currently anticipated at 150,000 units, rising to 200,000 after commencement of compact assembly. Overall, the Celaya facility will raise Honda’s North American presence to over 1.92m units.

The factory will employee 3,200 workers.

Mexico is currently a battleground for carmakers jostling for a position in what is fast becoming the top car export location for the US market, along with Japan and Canada.

Honda’s chief executive, Takanobu Ito, commented: “We have great expectations for growth in the US market as well as the Mexican market. In addition to having the North American Free Trade Agreement (Nafta), Mexico has free-trade deals with several regions in the world, including Japan and Europe.”

Honda will be using a variety of parts and vehicle logistics solutions, including regular rail and short sea services from a range of exit and entry points.

Volume will be flowing via rail up the middle of the country, and along the two coasts. From Celaya, a rail service every day will ensure parts reach the Midwest US, in addition to the ports of Lázaro Cárdenas, Mexico’s largest seaport on the west coast, and Veracrux on the east, currently North America’s busiest vehicle port.

Honda’s vice president of logistics and sales planning, Dennis Manns, told Automotive Logistics; "We received our first production unit last Friday. We will begin the movement of products after the first of the month. Both Mexican rail roads have been very supportive through this entire process... Our new east coast port partners are eagerly awaiting their first shipments in mid March; the car haulers understand their volumes and timing, and we expect few issues at this point.

"From a labor standpoint Honda will just headcount to manage this piece of business. Each of our partners have expanded their labour to handle this business... I have had interest in our plan from a number of OEMs. The bottom line is that there are a lot of moving pieces to this puzzle, and I understand that on a normal day you will get the occasional low outside curveball. My team's job is to recognise it, deal with it and move on to the next challenge."

As this magazine reported in an extended feature last year, Manns was confident that the flexibility and visibility at the heart of the Celaya plant will lead to its success. “Flexibility is the name of the game,” said Manns. “We wanted to make sure that, should we have a disruption on one mode or route, we could shift to other options without too much strain.”

• It was announced in January that American Honda now exports more vehicles from the US than it imports from Japan. Figures for last year show that the Japanese carmaker’s US division exported more than 108,700 Honda and Acura vehicles of a total production figure of more than 1.3m units (and almost 1.8m for wider North America). Read more here.