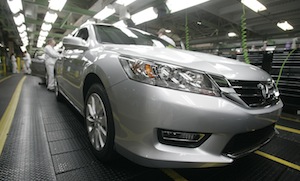 Honda has launched a new inventory ordering system that it says will give dealers greater flexibility in the selection of vehicles for sale and better meet customer demand.

Called APEX – for Allocation Preferencing and Exchange – the system replaces Honda’s previous system called MOVE (Market Oriented Vehicle Environment). As reported by Automotive News this week, APEX has been in development for five years and the carmaker said the system will move it closer to having its retail system driven by dealer orders while also providing those dealers with real time visibility of what is coming of the assembly lines.

The system will also provide a marketplace in which dealers can exchange vehicles.

Under the previous system, which has been used for the last 20 years, build confirmation took two weeks but the company said that with APEX that confirmation is now immediate, with a formal guarantee delivered three days later.