Honda part 2: Getting the lay of the land 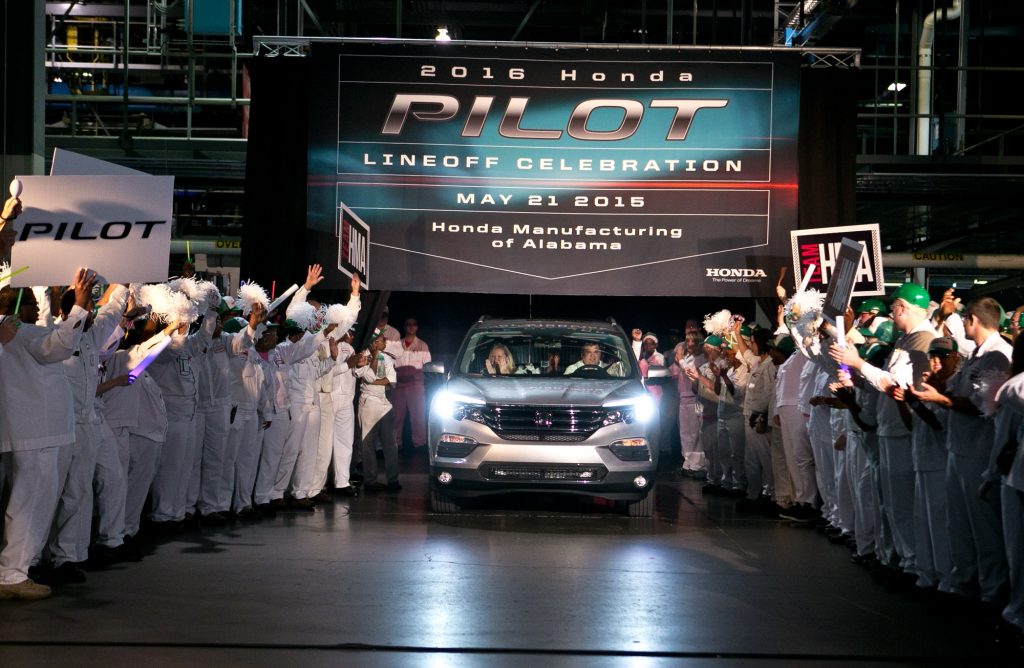 To fulfil the scale, diversity and flexibility of its North American production, in 2014 Honda bought some $25.5 billion of production parts from 700 suppliers across the US, Canada and Mexico

Honda’s footprint in North America has grown substantially since Soichiro Honda first set up a motorcycle factory in Marysville, Ohio in 1977, followed by the first car assembly line there in 1982. The carmaker now has ten assembly lines over eight plants, plus four engine and three transmission plants between the US, Canada and Mexico.

Honda’s supply chain is complicated not only by the scale of production – after launching a new plant last year in Celaya, Mexico, it can build more than 1.9m vehicles per year in North America, almost 45% of its global output – but also by the flexibility in assembly lines and co-located models. For example, Honda builds the Civic at its plant in Indiana and at another in Alliston, Ontario, in Canada, as well as the CR-V in Alliston, East Liberty, Ohio and at a small plant in El Salto, near Guadalajara, Mexico. The Acura MDX, a full size SUV, which is currently built only at Honda’s large SUV and van plant in Lincoln, Alabama, will get a second source in East Liberty by early 2017.

While Honda has engine plants for local output in Alliston, Lincoln and in Celaya, it also has considerable cross-supply out of its larger powertrain facilities. Its major engine plant in Anna, Ohio, some 50 miles (80km) from Marysville, builds more than 1m engines supplying Ohio, Indiana and Canada. A transmission plant in Russells Point, about 20 minutes from Marysville, supplies finished products and parts across all North America plants. Smaller transmission plants in Tallapoosa, Georgia, and in Celaya, which will open this year, are primarily for local plants. And while these parts already move around the world, they will do so more dramatically as North America takes even more of a lead over Honda’s global vehicle programmes, such as the next generation Civic, the initial launch of which will be based out of North America.

Logistics landscape at a glance

Honda’s supply chain network across the continent is vast. In 2014, the carmaker bought around $25.5 billion worth of production parts and material in North America from more than 700 suppliers, including around 555 in the US, 80 in Canada and 65 in Mexico.

While Honda’s North American logistics team is not responsible for every flow to its plants, it manages most, while paying for nearly all of them via its freight audit and pay system, which is also run together with its lead logistics provider, Ceva. In its managed network, Honda oversees around 2,000 truckloads per day, around 50 daily conveyances southbound to Mexico (mainly by intermodal), and the import of 150 containers (mainly 40ft) per week. Later this year, it plans to take over control of northbound flows from Mexico, which suppliers currently handle. 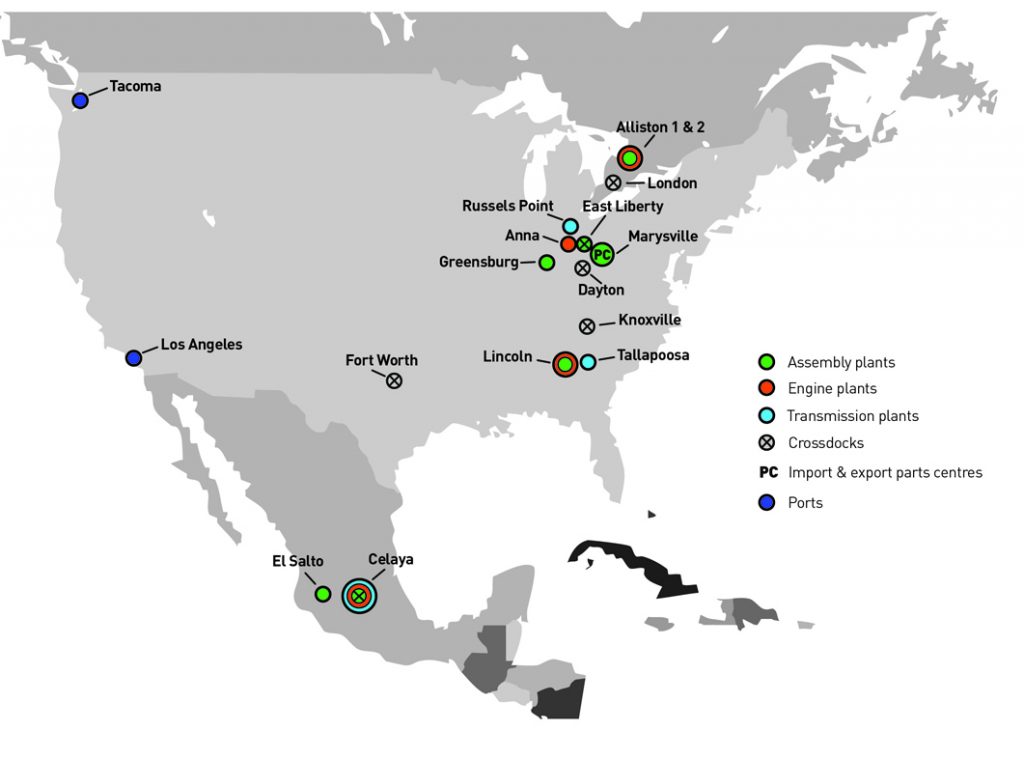 Many of Honda’s US suppliers are concentrated along the Interstate 75 ‘automotive corridor’, which runs from Detroit through Ohio, Kentucky, Tennessee and to Georgia. To create more efficient deliveries from these suppliers, Honda has installed crossdocks that sort material into shuttles for its plants. The company’s first and largest crossdock is in East Liberty, run by Ceva; it receives around 130 trucks each day from as far west as Nebraska and as far south as Texas, processes 6,000 delivery scans each day, and dispatches freight outbound to all of Honda’s plants by truck and, to Mexico, by intermodal. It also moves freight to a number of tier suppliers.

East Liberty is one of six North American crossdocks that Honda uses or shares. Ryder Systems manages three of these, including in London, Ontario, for shipments from the US for Canadian production, as well as local and export Canadian supplies. Other Ryder crossdocks are in Knoxville, Tennessee, and in Celaya. The latter will also be used to consolidate northbound parts from Mexico to the US and Canada.

Ceva leases a small amount of space in a large, shared warehouse close to Dallas Fort Worth Airport in Texas, where it has reserved Honda four dock doors to use for 12 hours a day. “It was a new model for us. If we decide we want to increase our floor space by four times and take 20 dock doors, we have the expandability,” says Dana McBrien. “Or, if we want, we can just walk away.”

Honda has also been sharing space in a crossdock with another OEM in Dayton, Ohio. According to Wade, Carter Logistics noticed an overlap between the carmakers’ networks and proposed that Honda take some of the available space. Since June 2014, the OEMs have shared the crossdock, including some routes and breakouts.

Honda has a number of other important logistics points at or close to plants in North America. Almost all Honda plants have added consolidation centres to help improve the flow of parts to plant gates and assembly lines. Larger plants such as Marysville and East Liberty have two each: one for bulk and weld part deliveries, and another for smaller frame parts.

Other outsourced warehouses dot the surroundings of plants carrying out parts handling and storage, or in some cases light manufacturing, such as tyre-and-wheel assembly. In Marysville and East Liberty, there are also further warehouses handling bulk and frame parts run by Nippon Express and NK Parts.

These two centres use Honda’s North American trucking network for the domestic leg of the supply chain, but also connect through intermodal hubs, including the Marysville intermodal centre, adjacent to the plant. It is a public yard, currently used only by Honda, which primarily receives material to or from sea ports.

Honda has an increasingly diverse mix of single-, dual- and global-sourced parts and components, which means more cross-shipping and order complexity requiring frequent adjustments across the network to avoid running half-empty trucks or incorrect packaging of parts to plants. Within the North American logistics department, Kevin Wade and his team lead a monthly re-engineering of routes, an analytical process done in conjunction with Ceva. 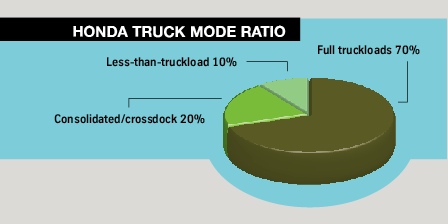 “We get the latest and greatest of the production plan, and optimise the mix, otherwise we might be blowing out [having more freight than truck space] on some deliveries,” says Wade. “There can be a lot of changes in the part sizes, packaging, volume and cube utilisation from different suppliers, and we have to react to that.”

During this process, the company accounts for differences in volume and changes in the supply base, and also makes any necessary packaging changes. According to Wade, re-engineering ranges widely in complexity, from changes that involve the same suppliers and packaging, and thus only an adjustment of routes or frequencies, to a full re-ordering of part sizes, packaging, volume and cube utilisation across 40-50 routes or more.

“The preparation to launch the model year ’16 Pilot [out of Alabama] was high complexity engineering,” Wade says. “A lower level complexity might simply mean tweaking the volume of CR-V output between plants.”

The politics of labour and drivers

Overall, Honda’s network is dynamic, flexible and efficient. However, Dana McBrien and Kevin Wade point to stresses, notably shortages of labour in Ohio and of truck drivers more broadly. “The capacity that still hits us right between the eyes is the driver shortage,” says McBrien, pointing to demographic changes and stricter regulations on driver hours and safety records. “It is becoming painfully more prevalent, to the point where we have carriers that are saying they cannot take on more business because they are struggling to keep drivers in their seats.”

The driver shortage is something that Honda’s logistics team keeps in mind when it does route engineering, while it is also an influence on sourcing decisions. “We try to position our processes so that the supply chain is stable enough not to destroy our relationship with carriers,” McBrien says. “If we change our sourcing too much, you end up having to turn over routes frequently, causing carriers to lay off or hire drivers. That is tough given the market for drivers.”

The driver shortage also impacts activities at crossdocks and plant consolidation centres, especially in Ohio. Here, Honda has moved away from ‘live’ loading or unloading – where trucks go straight to delivery docks for direct handling of cargo. Instead, trucks ‘drop and hook’, releasing their trailers at the yard and then leaving immediately or with other loads or empties for return deliveries. This quick turnaround prevents long truck queues from forming and helps avoid dwell time for drivers who may be needed elsewhere.

In some cases, employment issues are preventing more local supplier production or parts handling, again mainly in Ohio. In the surrounding counties of Marysville and East Liberty, unemployment rates are around 3.5%, well below what is typically considered ‘full employment’, making it difficult to expand or add new logistics facilities.

For example, it would be possible and perhaps desirable to expand the Ceva-run crossdock in East Liberty, but the company is worried about finding reliable labour, according to on-site managers. Honda has also discussed building a supplier park in the area to bring suppliers doing module assembly closer to the plants. However, McBrien has been telling his colleagues to “slow down”.

“If we tried to bring more suppliers and activity here, it would be tough to staff it,” says McBrien. “Our providers are already struggling.”

Labour shortage has become such an issue that Honda’s logistics team helped to form a consortium of local providers, including Ceva, Midwest Express, NK Parts, MPW and Nippon Express, to interact directly with the Ohio labour bureau as well as county officials. The companies are looking into state- and county-level initiatives to help recruit staff, but the government may not be able to act fast enough.

“At a meeting this past March, an HR representative from one of our providers told the officials that the only way the government could satisfy her issues would be if she could have 20 employees ready to drive forklifts on Monday,” McBrien says. “It is becoming a real problem.”

There are worse problems to have, but the issue demonstrates nuances and considerations in the supply chain that go well beyond transport costs or outsourced piece price. McBrien encourages wider considerations when choosing logistics locations. Counties or states with higher unemployment rates, for example, may have more resources and lower rents. “Many companies talk about near sourcing, but we don’t always want everything in our backyard. Sometimes it is better to put a supplier plant or a crossdock in a county that just lost thousands of jobs because a company moved,” he says.

McBrien adds that such moves could also be beneficial in political terms, especially in introducing a representative from congress or the state legislature to Honda. Such connections can help spur local infrastructure improvements, while bringing a positive impact to the local community. “Our budgets are important, but if you can capture a good story like that, make use of local resources and employment, and help develop a new area of car buyers, that is also important for Honda,” says McBrien.

Click here to read part 3 in our Honda series, "A history of integration".