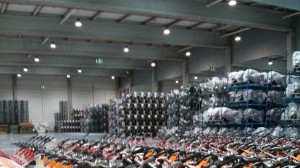 During June Honda will move its main Spanish hub exporting motorcycle parts and components to North Africa from the port of Algeciras to Barcelona. The change was prefaced by the company's opening of a logistics centre at Santa Perpètua de Mogoda, close to the Catalan capital. The switch of ports is being undertaken to reduce costs.

Previously, components (mostly for motorcycles) were sent from its logistics centre at Ghent, in Belgium, overland by road to Algeciras, where they were placed on board vessels for onward transfer to the port of Tanger-Med, in Morocco. Once in North Africa, the container would then be taken by road to Casablanca.

Under the new system, containers will still be shipped by road from Belgium to Spain, but despatch will now be made via the port of Barcelona. The service, which will operate weekly, will help cut the distance between the central Belgium warehouse and Morocco, thereby ensuring faster delivery.

According to Honda's customer and business support manger in Spain, Jordi Busquet, the changes of distribution route will allow the company to save around €57,000 ($95,700) annually.

Previously, Honda made use of facilities at the port of Barcelona to distribute motorbikes in both Spain and Portugal.

Honda is currently targeting growth in the North African market, having gained a foothold in Morocco, with Tunisia and Algeria being the short term objective. Here, it will again make use of local distributors.

Honda's existing 86,000 sq.m facility at Santa Perpètua de Mogoda, which opened in October 2013 at a cost of €12m ($20m), acts as a base for its commercial arm, production plant, safety institute, competition team and logistics centre. The plant, which covers 20,000 sq.m has 20 loading bays and can accommodate 48,000 parts and components as well as 6,800 finished motorbikes.

In addition to this arm of the business, Honda also has a motor vehicle production plant at and finance centre at El Prat de Llobregat, which is also close to Barcelona.