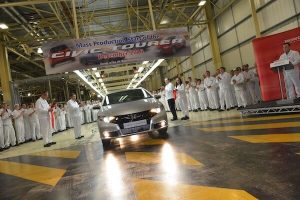 Japanese OEM Honda is to suspend production at its British plant for six days in April after the UK leaves the European Union on March 29.

The decision follows an assessment of how best to prepare for any logistics and border problems following Brexit.

“These contingency provisions have been put in place to best mitigate the risk of disruption to production operations at the Swindon factory,” a company spokesperson said.

“To ensure Honda is well placed to adjust to all possible outcomes, we are planning six non-production days in April 2019. This is to facilitate production recovery activity following any delays at borders on parts,” the spokesperson added.

The Swindon plant currently produces more than 150,000 units of the tenth-generation Civic annually. They are exported to more than 70 countries as well as being sold domestically in the UK.

Last September, BMW announced it was bringing forward this year’s annual maintenance at its Mini production plant in Cowley, near Oxford, from the summer to the beginning of April. This will minimise the risk of “any possible short-term parts supply disruption in the event of a no-deal Brexit”, the German OEM said.

In recent weeks, Toyota has warned any disruption to its supply chain following Brexit is likely to lead to a temporary shutdown at its Burnaston plant, near Derby, where production of the new Corolla hybrid is scheduled to replace the Auris on the assembly lines this month.

In the build-up to the British parliament’s January 15 Brexit vote, Honda, Toyota, BMW-owned Rolls Royce and Ford UK were among a number of major companies to put their names to a letter publicly supporting Theresa May’s Brexit proposals.

Her so-called Chequers deal includes staying in the European Common Rulebook to allow frictionless trade at the border for goods and services, vital for logistics providers to meet the demands of the automotive industry’s just-in-time and just-in-sequence production methods.

Senior vice-president of Honda Europe, Ian Howells, was quoted as saying: “If it’s easier for us to do that into Europe because there’s a common rulebook and common way of building and approving our vehicles, that’s positive for us.

“If those rules are the same as they are in the UK, then of course, from a volume and productivity perspective, that’s much more favourable for a company like Honda.”