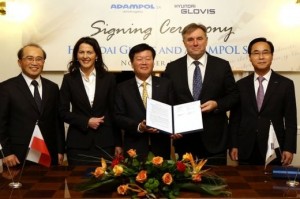 According to a statement attributed to Hyundai Glovis officials in an article from the Korea Herald, which Hyundai Glovis has posted to its website, “The corporate value of Adampol SA is more than €70m ($87m), which is the highest among foreign logistics companies that merged with local companies.”

According to a report on Inwestycje.pl, Glovis bought most of the shares in Adampol from Luxembourg’s EMPE, while 30% of shares remain with Adampol’s founder and vice-chairman, Adam Byglewski and the company’s current chief executive officer, Elena Lukanova. These details, however, could not be verified by Automotive Logistics.

Sources close to Adampol have suggested that the company had been for sale for at least a year, seeking interest from logistics providers in Europe as well as from the US.

Neither company was available for further comment beyond official statements, although an interview is expected with Glovis later this week.

Third party business for Glovis in Europe
Hyundai Glovis is part of the Hyundai Group, and is responsible for operating in-plant logistics and management vehicle logistics for Hyundai and Kia plants. Up to now, its European operations have focused more on contracting logistics providers and consolidating transport and warehousing between the two brands. Currently Hyundai Glovis has a number of logistical centres in Europe across five subsidiaries, including those Germany, Slovakia and the Czech Republic and Turkey, as well as an operation in Russia.

The acquisition, however, is part of the company’s stated ambition to increase third-party business in Europe, in line with operations in other global markets, including South Korea and the US.

In a recent interview with Automotive Logistics, Hyundai Glovis general manager in Europe Frank Schnelle said Glovis was considering acquiring assets in Europe directly to increase its inbound and outbound services to both Hyundai-Kia and third parties.

“Our understanding is that we have to own or control assets to provide value and to offer a service to other parties, so we are looking quite seriously at how to enter the market,” said Schnelle.

According to Korean and Polish press reports, Adampol transported around 400,000 cars for BMW, GM, Toyota, and Volkswagen last year, with more than €100m of sales and a 10% operating profit ratio.

Adampol said in an official statement that it had been intending to expand its logistics business through cooperation with a partner and that cooperation with Hyundai Glovis Europe is the next step in the development of both companies. “The cooperation allows to offer more efficient integrated supply chain solution, in particular in combination with the overseas shipping services from Hyundai Glovis,” it said.

Glovis owns a fleet of pure car and truck carriers that carry Hyundai-Kia exports from Korea, as well as other brands globally.