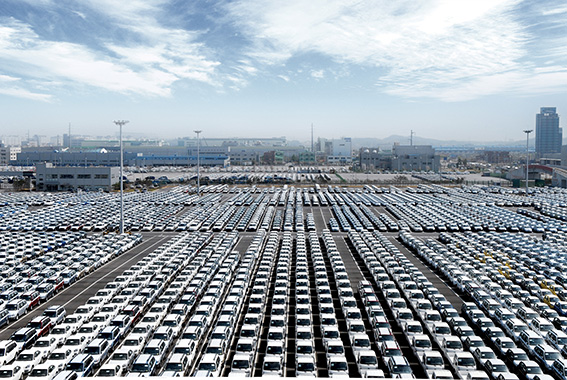 Hyundai Motor has been facing an all-out strike of its unionised workforce in South Korea after failing to reach a wage agreement, holding back the production of thousands of models destined for global export.

The strikes, the first all-out industrial action Hyundai has faced in its home country since 2004, have been taking place in phases across its plants in Ulsan (pictured, with adjoining export terminal), Jeonju and Asan, which collectively produce around 40% of the brand’s global output. Monday September 25th saw production stoppages throughout the day and night, with six-hour strikes planned for the rest of the week.

Kia, which is also owned by the Hyundai Motor Group, is also set to face partial work stoppages during a similar period as union workers dispute lower wages.

That drop is despite a pickup in demand for certain South Korea-built models in the US, which accounts for around one-third of the carmaker’s exports. The US market continues to shift towards SUVs and crossovers, mostly at the expense of the sedans that Hyundai mostly builds at its plant in Montgomery, Alabama. The South Korea-built Hyundai Tucson SUV, for example, has seen sales rise by nearly 75% in the US this year, even as sales of domestically built Sonata and Elentra decline.

Sales of the Sante Fe SUV, which is now mostly built for the US market between Kia’s factory in West Point, Georgia and also since this past summer in Montgomery, has also seen double-digit increases.

Should the strike persist, Hyundai could see constraints on finished vehicle inventory, with the risk of lost sales. In the US, where Hyundai and Kia have traditionally carried higher levels of inventories, suppliers are already relatively low, especially for the Hyundai brand. According to the Automotive News Data Center, Hyundai had around 47 days of inventory for trucks and SUVs, and 49 days for cars as of September 1st, while Kia had around 56 days for cars and 57 days for trucks. That compares to a current industry level of 61 days for cars and 62 days for trucks.

The carmakers could also see further constraints in delivery to other strong export markets, including Middle East and Asia Pacific.

Hyundai has so far not confirmed the extent to which the strikes might limit its global supply of vehicles.

It has also not confirmed how long the strike might last before production of kits and components in South Korea could slow or disrupt assembly at its global plants.

Hyundai and Kia together have been affected by strikes almost every year except four during the past 30 years. These factors, together with rising costs and appreciating currency, are among the reasons that the carmakers have aggressively expanded global production over the past 5-10 years.

General Motors’ South Korea unit had also faced consistent strikes in recent years. Analysts have suggested that it is among the reasons why the carmaker has shifted more small car production from South Korea to India, and moved some production from the country to other markets, such as Europe.