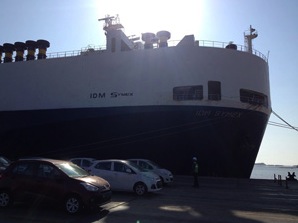 Hyundai has started using a new short-sea coastal service set up by Link Shipping and Management Systems for the transport of vehicles in India between the ports of Chennai on the south east coast, and Pipavav on the north west.

However, high port fees are dissuading more shipping lines from entering the Indian finished vehicles cabotage market, according to Mandeep S Tiwana, owner of the IDM Symex, the ro-ro vessel that moved the vehicles in the first week of February.

The IDM Symex picked up 800 vehicles at Chennai port for a six-day sailing to the specialist container terminal at the port of Pipavav, which is run by NYK in a joint venture with APM Terminals. The vehicles, which were delivered on February 5th, were made at Hyundai Motor India’s Sriperumbudur plant near Chennai, and were destined for west India dealerships.

According to terminal management, modal shift incentives currently under evaluation by the government should encourage more transfers of domestic cargo from road to sea.

Indeed, the Indian government said that the availability of ro-ro vessels is essential to the success of developing coastal shipping and decongesting roads and railways. As an example, it cited the large number of automobile clusters existing at Manesar and around Chennai. This results in large numbers of cars being transported between the north and the south, much of which it argued could be transported by coastal shipping.

Port fee calculationsHowever, the way port dues are calculated means that costs remain high, which is dissuading more lines from taking up the mode as an option for domestic shipments. Port dues for ro-ro vessels are calculated on gross registered tonnage (GRT), rather than on the dead weight tonnage (DWT). Were the latter measure to be used, port dues would drop to one-third of the present charge.

Tiwana suggested that ports need to adjust rates to suit the trade. He pointed out that the GRT for standard vessels is around 66% of DWT; on ro-ro vessels, the GRT can be 400% greater than DWT.

In terms of operating economics, the IDM Symex’s return voyage from Chennai to Pipavav costs around $219,000. Of this, combined port charges levied by both ports totalled $60,000; vessel running and maintenance costs – a figure including salaries – amounted to $48,000; fuel came to $40,000; and insurance to $6,200.

Although the shipper is liable for the wharfage costs, the vessel owner has to stump up for pilotage and berth hire. Ports in other countries pay less per GRT than is the case in India, claimed Tiwana, citing the case of Antwerp, where a tanker would pay 0.36 cents per GRT and a ro-ro vessel 0.17 cents. In contrast, Indian ports apply some of the highest charges in the world for car carriers.

“If the charges were low, we could drop cars and pick up vehicles at ports like Mumbai and Kochi,” he said, adding that coastal shipping complements both road and rail in the overall inter-modal chain. “We are not blaming port tariffs, but highlighting the fact that if we treat all vessels on one scale then we will not go beyond dry bulk or wet trade in our country.”

Symex was the shipping line chosen by Hyundai to undertake the coastal shipping experiment with finished vehicles. As part of this, Chennai Port Trust offered competitive wharfage charges of $7.29 per unit, compared to the standard charge of $17.50.

“Chennai Port Trust surprised me with their support,” said Tiwana. “However, all the stakeholders are now working as a team to make the ro-ro coastal service a success. In shipping, speed is the key.”

While conceding that it is up to the vessel owner to correctly manage operating economics, he pointed out that some countries will offer cash incentives to attract new business. This is not yet commonplace in India.