Hyundai Motor has successfully conducted its first platooning of trucks on the Yeoju Smart Highway in South Korea to replicate real-world traffic conditions. 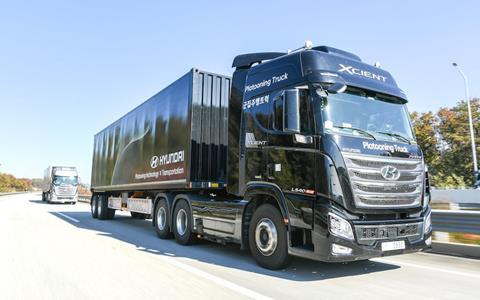 The stretch of road concerned is a 7.7km testbed within the central region expressway set up by the government to develop autonomous driving technology. The highway is constantly used by vehicles for autonomous driving research, making it similar to the conditions of an actual motorway, according to Hyundai.

The company carried out the tests using two 40-tonne Hyundai Xcient trucks with trailers. The trucks were successfully vehicle platooned and interacted with other vehicles. Simultaneous emergency braking was also trialled along with vehicle-to-vehicle (V2V) communication technology. The speed limit was 60km/h to ensure safety.

If another vehicle cuts in between the trucks, the following truck automatically extends the gap to minimum of 25 metres.

“The driver does not need to put [their] foot on the accelerator nor brakes, vastly reducing fatigue on the road and improving safety,” said Hyundai.

The equipment being tested includes a live video display showing the road ahead of the leading vehicle, solving limitations of forward vision for the following truck driver.

Hyundai Motor’s goals include achieving a higher level of platooning technology to work under even tighter following distances between vehicles and implement traffic information for optimised travel in the future.

Among vehicle platooning’s benefits, the company argues, is reducing air resistance to improve fuel efficiency and lower emissions, making it an eco-friendly technology.

Hyundai’s demonstration is part of a project South Korea’s government launched last year in partnership with corporations and academia to support pioneering efforts in autonomous technology.