Hyundai switches to Gdansk for exports to the UK 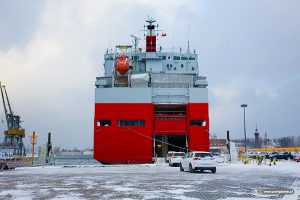 The Polish port of Gdansk has increased its vehicle handling as part of a new three-year service being provided by ocean carrier K Line, which is moving Hyundai vehicles between there and Tilbury port in the UK. Around 50,000 vehicles will be moved through the port each year.

The vehicles are being moved to the port (pictured) from Hyundai’s Nosovice plant in the Czech Republic by road and rail. Polish transport and logistics provider Adampol, which is now majority owned by Hyundai Glovis, is transporting the volumes to Gdansk.

Along with transport, Adampol is providing services that include storage, waxing and pre-delivery inspection (PDI) through its operation located near the Nosovice plant, which opened two years ago. That operation is processing 1,300 vehicles a day.

Hyundai was previously moving vehicles from Nosovice via the Belgian port of Zeebrugge for export but the Port of Gdansk Authority said the carmaker decided to switch ports based on Gdansk port’s “good location and attractive shipping prices”.

The move followed a visit that Hyundai Kia Automotive Group and Adampol made to the port in 2015 to assess the logistics potential of new vehicle moves through the port.

“This is also the beginning of the successive rebuilding of Gdansk's position in the logistics chain of transport of products from the automotive sector, which was at a peak in the years 2007/2008,” said the port authority in a statement. Amongst those numbers were vehicles for Audi, GM, Mitsubishi, Nissan, Toyota and VW.