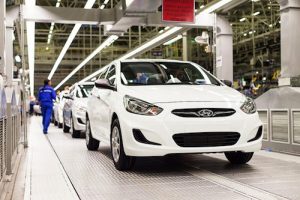 Korean automaker Hyundai has plans to invest $100m to expand and modernise its plant in St. Petersburg in preparation for the production launch of its Creta SUV along with the new model Solaris, both of which are due in 2016.

“The investment will be spent on completion of facilities, expansion of the stamping unit and the purchasing of new press equipment,” said Victor Vasiliev, spokesperson for Hyundai’s Russian division.

Preparations for the production launch of the Creta are scheduled to take place during the summer shutdown next year. Hyundai will also have to stop the assembly line between October and November 2016 to prepare for assembly of the new Solaris.

“The sources for the supply of components will remain the same, as well as the way of delivery – from the company's factories in Korea, Russia, China, India and Europe,” said Bobryshev.

He added that Hyundai is increasing the capacity of the St Petersburg plant by 5%. Annual production currently stands at 200,000 vehicles made up in the main by the current Solaris model and the Kia Rio.

"The experience of other countries shows that it is expedient to manufacture engines at the capacity of the main plant, where production is at 500,000 cars per year,” he said, adding however, that should sales and production increase at St Petersburg, engine production would be a consideration for the future.

Earlier this year Hyundai announced plans to launch exports from the St Petersburg plant to Belarus, Kazakhstan, the Baltic States, Trans-Caucasus and Eastern Europe.
It also announced plans to export the Solaris model to Egypt, in part to compensate for losses in Russia.