Audi special report: A question of complexity and convergence

The plethora of models, derivatives and options that has boosted Audi’s success over the past decade would not have been possible without an evolution in its logistics management and processes 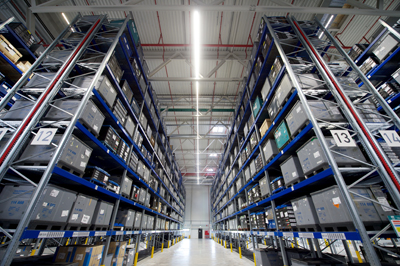 Audi’s emphasis on technology and innovation – Vorsprung durch Technik, as its Teutonic motto proclaims – is at the core of its premium identity. It’s a strategy that has supported volume and profit growth, as well as proliferation in models, derivatives and options. From having just ten models in the early 1990s, Audi will soon offer 60, each capable of many configurations. According to the company’s logistics management, part numbers more than doubled between 2005 and 2012, and are increasing fast as model cycles shorten. Audi’s plant in Neckarsulm, southwest Germany, leads the Volkswagen Group with around 50,000 active part numbers, spread across the A4, A5, A6, A7, A8, R8 and quattro customised models that are built here.

Audi executives are fond of saying that no two Audis built in a year are identical. Bystanders counting the number of black, diesel-powered A3s speeding down the autobahn might dispute this claim. However, customers can point to the trim colours, interior material and climate systems that make their cars unique, while those in the factory deal with variations that surpass the capacity of the human mind. At Audi’s headquarters and largest plant in Ingolstadt, Bavaria, which builds versions of the A3, A4, A5 and Q5, there are more than 2,500 variations just for front-end modules and 10,000 for roof modules. For the A3, the total number of theoretical variations can’t be expressed in thousands, let alone millions or billions – it is 1038.

Besides its army of engineers, Audi manages this complexity through data-driven, highly planned logistics. Especially for its space-constrained German plants, Audi has invested in logistics centres while re-engineering process flow, packaging and equipment, according to Dr Michael Hauf, head of Audi brand logistics.

“The high degree of customisation is the main driver for process complexity, with this especially reflected in the space requirements for logistical processes,” he says.

Among the principal changes for Audi’s logistics has been an increase in transhipment to small-load carriers – boxes and containers for smaller parts – in logistics areas and at the assembly line. Audi has also introduced more automated-assisted picking systems in parts supermarkets.
While kitting and small box deliveries are on the rise, so too are just-in-sequence (JIS) deliveries as Audi localises suppliers at logistics centres and supplier parks. Neckarsulm, in particular, has also been successful in long-distance JIS flows – known as ‘pearl chain’ – with other plants following its example.

Hauf and his team have managed these changes by working with other departments as many as four years before production starts. “We collaborate particularly closely with our engineers, buyers and suppliers, but also with sales,” he says. “We have made efforts to standardise more equipment and consolidate flows.”

Audi’s success over the past decade is evident from the rise in its sales and output, from just more than 780,000 vehicles in 2004 to what is likely to surpass 1.7m for 2014 (from 1.57m in 2013). European production has been strong, with Audi’s two main German plants on three shifts and its Brussels, Belgium plant for A1 variants at high capacity. Output has been expanded in Gyr, Hungary, where Audi builds versions of the A3 and TT models. Its models also roll off assembly lines at Volkswagen Group plants in Martorell, Spain; Bratislava, Slovakia; and Kaluga, Russia. 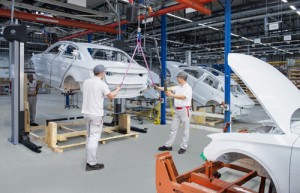 Global expansion has been a feature of Audi’s production and supply chain over the past decade, most notably at joint-venture FAW-VW plants in Changchun and a new factory in Foshan. Knockdown models are built at a group plant in India, and will soon roll off the lines in Brazil. A dedicated Audi factory is under construction in San José Chiapa, Mexico, which will start part-by-part production for the new Q5 in 2016.

The expansion has been driving material and complete knockdown (CKD) parts export for Audi across all transport modes. Parts exchanges are also growing as a result of assembly co-location, with ‘mother plants’ feeding components and bodywork elsewhere. For example, the A3 is built in Ingolstadt, while limousine and convertible versions are assembled in Hungary; Ingolstadt also makes the A4, as do plants in Neckarsulm, China and Indonesia; the A6 has its mother plant in Neckarsulm and is also assembled in China, India, Indonesia and Russia; the Q3 is produced in Martorell and China. Today, the Q5 is built in Ingolstadt, China and India, but the globalising trend will continue in force with the new model: from 2016, the Q5 will be fully built in Mexico. As Q5 production will end in Ingolstadt, Audi’s part flows in this case will be more decentralised, with Mexico feeding further Q5 assembly in India and China, says Hauf.

Component and especially powertrain supply for Europe is mainly in Hungary, although there are also engine factories in Silao, Mexico and Tianjin, China. Gyr produces and packs approximately 2m engines each year (including many that move by rail to Ingolstadt and Neckarsulm) for Audi as well as other group plants; Audi also sources global gearboxes mainly from a group factory in Kassel, Germany and shares other components from the Volkswagen production network.

To manage these parts operations, Audi has a significant footprint for CKD and material exports, with specialised packing plants run separately to production plants. These centres receive parts from suppliers and group factories, pack material into sea containers and send them to ports – often by rail – for shipping to plants in China, India and Russia, for example. There are Audi packing plants in Ingolstadt, Wunstorf and Duisburg, Germany; another in Gyr is for engines. Audi also uses group packing centres in Kassel and Martorell.

According to Hauf, who is also responsible for parts exports, Audi’s European parts exports to global destinations in 2014 were set to reach 58,000 TEUs. With the new production coming online in the Americas and China, that number is expected to grow in double-digit percentages over the coming years, he predicts.

Part complexity and global locations are not unique to Audi within the Volkswagen Group, but as the world’s second largest premium brand and a major profit centre for the group, its logistics have an outsized influence. Systems and processes from Audi tend to spread elsewhere in the Volkswagen world.

The Neues Logistikkonzept (new logistics concept, NLK), now common in group plants, has much of its origins in Audi’s production system and has become an integral part of the Volkswagen Group production system. The company’s design of ergonomic packaging and simplified worker movements are a case in point. Advanced NLK strategies, including integration between in-plant and inbound logistics, are often done first at Audi, including Neckarsulm’s perfecting of the ‘pearl chain’.

Audi’s interaction with group logistics at Wolfsburg, which is managing the group-wide NLK project, is also becoming more important as Volkswagen continues standardising models across fewer platforms, increasing not only shared suppliers, but also processes, systems and infrastructure across brands. Audi already uses the MQB modular platform, which is set to undergird so much future production, for its new A3 at Ingolstadt, as well as the MLB platform for several models at Neckarsulm.

“In the past, Neckarsulm was like an island for our A6 and A8 models, with almost no connection to other plants,” says Dieter Braun, head of production control and plant logistics at Neckarsulm. “That point has changed dramatically with the MLB platform, or the MQB in Ingolstadt, as many parts are used group-wide.”

Such platform sharing is leading group supply chains to converge, with significant logistics implications. For example, rail shipments are increasing for bodies built and shipped between group plants. “We receive 27 train wagons per day, especially related to the bodyshop, press shop and powertrain,” says Braun. “This is especially for the A platform or the MQB from other group plants.”

Shared suppliers, however, do not inevitably lead to consolidated logistics; plants could use the same supplier, but different part numbers, or the same part number from different suppliers. However there is enough convergence in the group to impact the logistics network. In response, Volkswagen group logistics, in Wolfsburg, implemented a group-wide transport network several years ago and is now taking a next step with the trial of a group-wide crossdock near the VW plant in Bratislava. This shared facility feeds Audi and other group plants. Hauf and his team expect that VW will introduce similar crossdocks in a number of other European countries over the next two years.