Carmakers and their suppliers have had two years full of volatility, uncertainty, complexity and ambiguity (Vuca) and are actively looking for new strategies to mitigate risk in the supply chain secure future production.

The ongoing Covid pandemic, materials and parts shortages (including semiconductors), labour shortages, extreme weather events, and war and sanctions have all contributed to havoc supply chain managers are dealing with.

Tesla confirmed a long-term supply agreement with Vale, one of the largest nickel producers globally

The timely supply of raw materials and components is crucial to smooth manufacturing. OEMs and their tier suppliers need to know which of those materials and parts are difficult to source or already in short supply. Many have taken action to secure supply through vertical integration. It means OEMs are aligning the sourcing and supply of critical components and commodities needed to produce their cars.

Tesla and Vale
On May 6 this year Tesla confirmed a long-term supply agreement with Vale, one of the largest nickel producers globally, with mines in Brazil, Canada and Indonesia. Meanwhile, in a bid to not rely on single sourcing, but enhance a multiple sourcing strategy, Tesla has this month sent a delegation to visit the nickel production hubs in Morawali on Sulawesi Island in Indonesia. The electric carmaker is looking to invest in Indonesia, the world’s largest single source of nickel, and sent a proposal to the government February last year.

VW is also looking at an integration strategy, and in March this year signed two memorandums for cobalt and nickel supplies. The first joint venture will be a three-way partnership between VW, Huayou Cobalt and Tsingshan Group for the extraction of nickel and cobalt from Indonesia. The second is for refining nickel and cobalt sulphates, which are much needed for battery cathode production.

“The two partnerships target to contribute to the group’s long-term target of a 30-50% cost reduction on each battery,” VW said.

Adaptation strategies
The automotive industry has also been playing second fiddle to the consumer electronics industry when it comes to the supply of semiconductor chips. In some cases carmakers are waiting 12-18 months for the components. In response they are applying so-called ‘adaptation strategies’, which the carmaker aligns future supply to avoids any such issues from occurring when newer, faster and more advanced chips are needed in the next generation of their cars. 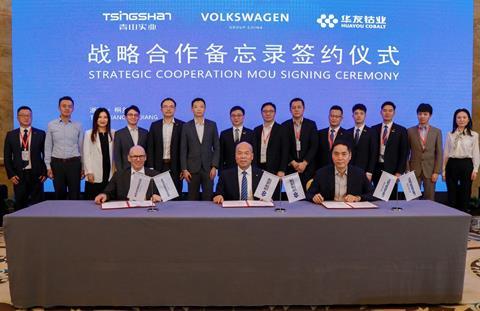 “We are deepening our partnership with suppliers at key points in the network and synchronising our capacity planning directly with semiconductor manufacturers and developers,” Dr Andreas Wendt, head of purchasing and supplier network at BMW Group. “This improves planning reliability and transparency around the volumes needed for everyone involved, and secures our needs for the long term.”

The agreement guarantees the BMW Group the supply of several million microchips per year.

“This agreement is just the beginning, and a key part of our plan to vertically integrate key technologies and capabilities that will differentiate Ford far into the future,” said Jim Farley, Ford president and CEO.

Potential bottlenecks in sourcing of batteries in the push to electrify vehicle fleets has accelerated the move to vertically integrate battery sourcing.

“By integrating the battery assembly process in our production flow, we can shorten lead times for our customers and secure high-performing batteries, while at the same time increase circularity,” said Roger Alm, president of Volvo Trucks.

In the same month, Skoda’s CEO, Thomas Schafer, announced the start of battery production at its plant in Mladá Boleslav for Skoda, VW, Audi and Seat brand cars. The plant has an annual capacity of 250,000 battery systems a year based on the VW Group’s modular electric drive matrix (MEB) platform.

Stellantis too has committed to vertically integrating battery production in a $4.1 billion joint venture with LG Chem.

With disruption now happening at faster intervals than previously experienced, strategies have changed and OEMs and their suppliers are integrating crucial, critical and vulnerable parts of their supply chains, while adapting strategies to counter future supply chain shocks. These are more expensive strategies but are designed to remove the risk of costly downtime in the future.