Signs of movement on the Suez Canal

One week after the Evergreen container vessel MV Ever Given became lodged across the Suez Canal, it appears as of March 29 that efforts to shift the 400-metre-long, 200,000-tonne vessel have been successful and the backlog of other ships is starting to move along the waterway once again.

The chairman and managing director of the Suez Canal Authority (SCA), said on Monday that the Panamanian container ship had been successfully refloated. 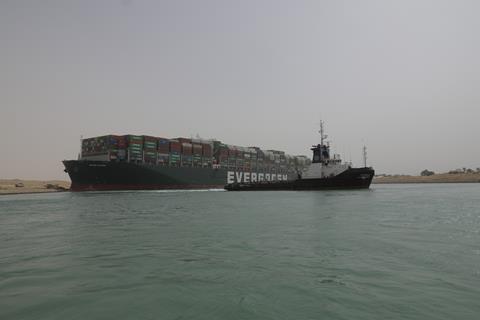 “This was the result of successful push and tow manoeuvres, which led to the restoration of 80% of the vessel’s direction; with the stern 102 metres away from the bank of the canal now instead of 4 metres prior to the refloating,” he said.

Dutch company Smit Salvage has used tugboats to move the ship from the canal bank after a week of efforts to solve the problem. Those efforts included the use of dredging equipment to move about 20,000 tonnes of sand from the canal bank into which container carrier’s bow had become embedded.

The container vessel is now being assessed for seaworthiness to the side of the channel leaving room for the backlog of other vessels to continue on the their delayed journeys.

The M/V Ever Given became lodged across the canal on March 23 though the cause remains unclear and may be to do with a combination of human or technical error, as well as the high winds and sandstorm first reported as the reason.

While the movement of the vessel is good news there remain 400+ vessels now backed up in either direction, with an estimated $9.6 billion in goods held up per day. Disruption to freight shipments is expected to last for some time.

“Blockage of the canal has already created a long queue of vessels awaiting transit and will cause delays to all vessels and their consignments currently operating on routes between Europe and Asia,” said Norwegian global vessel operator, Wallenius Wilhelmsen in a statement. “As of March 26, 11 of our vessels are impacted by the blockage.”

The company said that it was continuously monitoring the situation to assess accessibility for south and northbound services, and to review diverting vessels on the longer route via the Cape of Good Hope. That route adds around nine days to Asia Europe shipping, taking a 16-knot average vessel speed.

Höegh Autoliners also said it was monitoring the situation. “So far, our vessel, Höegh London V93 has been impacted awaiting transit from the south side of the canal,” said the marine logistics provider in a statement. “Although this situation is beyond our control, we are doing our best to minimise delays and apologise for the inconvenience this has caused.”

The back up in the delivery of goods aboard vessels queued for passage through the Suez Canal could also exacerbate the shortage in the supply of semiconductors, which is already affecting global vehicle production.

The Suez Canal, which separates Africa from the Middle East and Asia, is one of the busiest trade routes in the world, handling 12% of global trade.

Keep posted for updates on this story as the situation develops