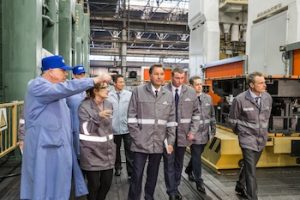 Russian vehicle maker AvtoVaz has been forced to stop production at its plant in Togliatti because of inbound supply problems that will halt assembly for three weeks. The company is now planning to get rid of the problem suppliers within the month, according to the company’s president Bo Andersson. The changes to its inbound supply will also cut logistics costs, added Andersson.

The carmaker was forced to halt production at the plant last week (July 28th) because of a parts shortage. Production on the 1.5km of assembly line at the plant is expected to be affected beyond next week and will not be up and running again properly until August 18th.

Officially, the company’s management didn’t disclose the reasons for shutting down production, but employees at the plant confirmed that it was because of a lack of sufficient parts.

AvtoVaz’s huge Togliatti plant produces a range of vehicles including those from Lada, the Nissan Almera, three Renault models (Logan, Sandero and Sandero Stepway) and the Datsun models – on-DO sedan and mi-DO hatchback.

Andersson said that last year the carmaker had suffered parts supply problems from seven of its suppliers but had since reduced that number down to three. “We expect that within a month we will stop working with them,” he said. “Under our new programme we will choose only the right suppliers from now on."

Repeated supply problems
Similar supply problems hit AvtoVAZ at the end of 2014 and the beginning of 2015, when three of its partners demanded changes to the terms of their contract and threatened to stop deliveries.

Andersson explained that he was at the Togliatti plant over last Christmas and New Year, and during that period there were 9,000 uncompleted cars on the conveyors.

“All of this took place because three suppliers [were able to] ‘hold a pistol to our heads’,” said an exasperated Andersson. “This is something I will never tolerate,” he vowed.

The company’s investigation into the delivery problems showed that a number of suppliers had been selling AvtoVaz components purchased from abroad, namely in China.

"On the ‘B0’ line, where we make Nissan, Renault and Largus [the Lada compact MPV], we localised 3,000 units of components,” Andersson explained. “But there are still 2,000 components where it is more profitable to buy in Europe. [However], we were surprised to find out that individual suppliers were buying components in China and discovered nearly 10 such cases.”

According to Andersson, AvtoVaz will now turn to direct supplies of components from China, abandoning its intermediate partners. Such an approach will save up to 25% of the logistics costs, he said.