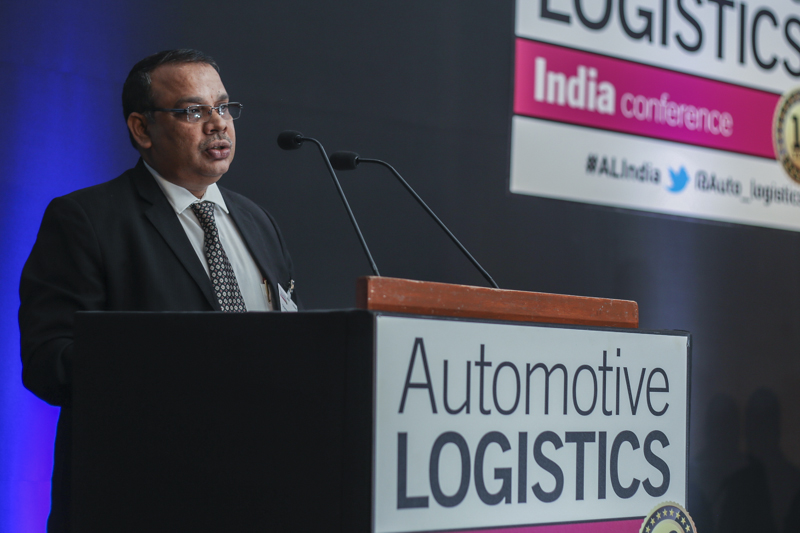 Indian commercial vehicle manufacturer Ashok Leyland has not been waiting until the Goods and Service Tax (GST) comes into effect next year across India to make major changes to its logistics and distribution network.

Over the past two years, the truckmaker has rationalised its distribution centres and logistics provider base, introduced new equipment delivery patterns and expanded rail and ro-ro routes. The efforts have led to a reduction in freight and handling cost, as well as a decrease in damage rates, according to Chandra Kant Mishra (pictured), general manager and controller of operations for global trucks at Ashok Leyland, speaking at the 2016 Automotive Logistics India conference in Gurgaon.

Post-GST, the truckmaker has plans to consolidate its distribution and sales order process even further.

Ashok Leyland’s transformation began in 2014 with a reordering of its storage space at regional sales offices (RSOs), which serve as stockyards for dealers in each of India’s states. Ashok Leyland had previously used 27 RSOs across the country to hold vehicles prior to dealer delivery, representing a total area of around 123 acres. In redesigning the network, the company converted a number of plant yards into RSOs, eliminated a number of yards, and added another location.

While the redesign increased the overall number of yards from 27 to 28, more optimal planning of space led to a fall in land use by almost half, to 68 acres, and thus lower rental, security and administrative costs. The truckmaker made this change even as its vehicle volumes rose sharply, with deliveries climbing 28% year-on-year in the financial year 2015, and a further 48% in 2016.

“We rationalised the storage space at RSOs by better planning and handling huge volume,” said Mishra. “The industry practice is to increase space when volume increases, but we made a breakthrough.”

Currently, the truckmaker is moving around 115,000 trucks a year for the domestic market in India and exporting around 10,000 units to markets in Asia, Africa and Latin America.

Mishra pointed to improvements in layout for handling chassis in the yards, as well as outsourcing yard operations to logistics providers. “We subcontracted yard development to partners like Wallenius Wilhelmsen Logistics and we hand over products to them at the end of the production line to improve quality,” he said.

Another big change has been an increase in the amount of ‘truck-on-truck’ transport, in which trucks are hauled by specialised equipment to their destinations, rather than being driven individually there in so-called ‘jockey’ operations. Truck-on-truck delivery now accounts for 40% of Ashok Leyland’s deliveries across India, which has improved loading factors and reduced damage. According to Mishra, the company is also working on adapting a new design that allows trucks to haul three chassis rather than two.

The truckmaker has also been among the first commercial vehicle manufacturers in India to adopt rail transport for its equipment deliveries. According to Mishra, costs per vehicle are around 21 rupees per kilometre for rail compared to 30 rupees for truck-on-truck. “Moving volume by train is helpful to achieve our overall volume and quality targets,” he said.

Ashok Leyland’s network rationalisation has included its use of transport carriers through periodic performance reviews. According to Mishra, this includes rating carriers for on-time delivery, accident and damage rates, and their ability to serve the pan-Indian market. As a result, over the past few years, the number of jockey transporters serving Ashok Leyland has decreased from 16 to 7, while the number of truck-on-truck providers has fallen from 18 to 10.

For inbound logistics, where the truckmaker has also made changes, the number of providers has been reduced from 40 to 10. Mishra says that Ashok Leyland has tried to use the same logistics provider for inbound and outbound logistics where possible.

On the export side, the truckmaker has pursued ways to reduce inland transport and distribution time. Exports to Sri Lanka, for example, had previously moved from Ashok Leyland’s plant in Hosur, in southern India, north-west to Mumbai, where they were shipped to Sri Lanka. Six months ago, however, exports starting moving through the much closer port of Chennai, where they are shipped by ro-ro to Sri Lanka.

The end result is a significant reduction in distribution time and costs, thanks to the shorter inland and shipping routes. The manufacturer has shipped more than 900 vehicles by this method over the past six months, with savings of more than 23,500 rupees per vehicle.

“We have also engaged with WWL to see that our exports at the plant yard from Chennai are handled well and are prepared for export,” said Mishra.

Rolling with technology and regulationAshok Leyland is pursuing a number of other innovations in technology and processes to streamline logistics. On the inbound side, it is looking to roll out an online-based transport management system that would eliminate most paper requirements, make pre-gate and dock assignments, and automatically release equipment and freight payments.

Outbound, the truckmaker also wants to carry out vehicle allocation and monitoring through mobile-based apps, as well as to switch to electronic proof of delivery (ePOD) wherever possible.

Further network and transport mode changes are expected once GST is finalised and implemented, which is currently expected to be by April 2017.

The reform is intended to eliminate a variety of state and local taxes across India, allowing goods and services to be distributed directly across state lines from factories and distribution centres, rather than from regional stockyards as is necessary today. For Ashok Leyland, an effective implementation of GST would make it possible to reduce its RSOs further.

The company is exploring a number of options. In one network, Ashok Leyland could use 13 RSOs, including those at plants. In this scenario, Mishra predicted the company would be able to service 72% of locations across the country within one day, and 99% within two days. Another option would include 14 RSOs, as well as a strategic call location in the eastern city of Guwahati, which would serve 92% of the country in one day, and 99% in two days.

Mishra pointed out, however, that Indian businesses still have little clarity on the exact rules around GST and taxation rules. “We are still waiting,” he said.

Watch a video of Ashok Leyland's presentation and others from Automotive Logistics India here.