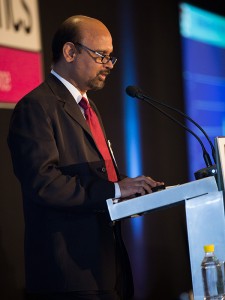 Indian Railways (IR) has begun work on its long-planned dedicated freight corridor for rail, with expectations that large sections of the network could be operational by 2019. The corridor, which will eventually cover India’s ‘golden quadrilateral’ between the regions of Delhi and Chennai, Mumbai and Kolkata, is expected to increase capacity and speed for rail freight in India substantially, and also introduce freight services timetables for the first time in India.

“There is a huge potential to move more automotive freight, including vehicles and parts,” said HD Gujrati (pictured), director of the Dedicated Freight Corridor Corporation of India (DFDCIL), a publically owned division of the railways, speaking at the 2014 Automotive Logistics India conference in Gurgaon.

The freight corridor has been in the making for about ten years, with the expectation that India needs to invest in its rail capacity if it is to meet future passenger and freight demand. Rail cargo has already grown from 400m tonnes in 2001 to more than 1.05 billion tonnes in the last financial year. Expectations are for this to grow exponentially over the coming two decades, said Gujrati.

The project, which will cost around $16 billion, was originally intended to open by 2016 but will now see the major sections of its eastern corridor, between Ludhiana in the north to Kolkata in the east, and the western corridor to Mumbai, operational by 2019.

According to Gujrati, the project has already secured more than 95% of its financing – principally through loans from the World Bank and JICA – and has acquired more than 80% of the land necessary for the corridor.

Capacity, height, width and speed will all be greater on the corridor than for the general IR network. Wagons can be double stacked to 7 metres high on the western corridor, compared to 4.2 metres for most of the general network, and go up to 5.1 metres for the eastern corridor. Gujrati also expects to relax width requirements to 4 metres, compared to 3.2 metres on the IR network.

While current freight trains are typically limited to around 27kmph, trains on the corridor are expected to move around 65-70kmph. Trains can also carry heavier loads and can be up to 1.5km long.

For the automotive sector, Gujrati pointed to a big increase in the amount of vehicles that can be moved per rail wagon as a big draw of the network. Because freight will have priority on the corridor (compared to passengers on the general network), the railways will be able to run timetables for the first time, which would be a big plus for manufacturing sectors like automotive, said Gujrati.

According to Gujrati, the dedicated corridor would be accessible to other operators through one of a variety of models, including joint ventures with DFDCI or access payments. That means that those, for example, operating under licence from the Automotive Freight Transport Operator (AFTO) policy, which currently includes Maruti Suzuki and APL Vascor Automotive, would be able to use the network.

The eastern and western networks are still several years from completion, while commissioning on future phases has not yet begun. But Gujrati said that he expects the system to be a “game changer” for India.

“This will amount to a quantum jump in capacity,” he said.

A video recording of HD Gujrati's presentation, along with other main sessions from the conference, can be viewed here.