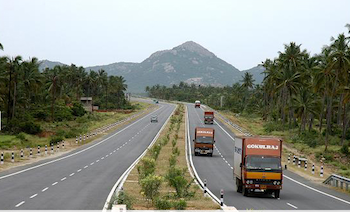 The Indian government has confirmed that a new national 18.75 metre maximum length limit will be applied to trucks carrying finished vehicles from April 1st next year.

From that date, the Ministry of Road Transport and Highways has finally decreed, no automotive manufacturers will be allowed to load finished vehicles into transporters that exceed the new limit, which will apply to both articulated and drawbar rigs.

The new rules also require trailers to be fitted with at least one sliding inspection window on the side measuring 400mm long and 300mm high. The trucks pulling them, meanwhile, will also have to be fitted with speed limiters allowing a maximum of 60kph as well as rear-view cameras from that date.

The long-awaited move, which has looked imminent since March, should bring to an end the widespread use throughout India of car carriers that are 22 metres or more in length and unifies previously varying maximum length rules across different Indian states. It is believed almost three-quarters of the 13,000 car transporters in the country currently exceed the 18.75 metre limit, a number of which have been involved in high-profile, fatal accidents in recent years.

Abhay Damle, joint secretary of the Ministry of Road Transport and Highways, told Automotive Logistics earlier this year that carmakers had been complicit in the use of such oversized vehicles, encouraging vehicle operators to upsize their trucks to take 10 rather than eight vehicles at a time.

Car hauliers have welcomed the move. Vipul Nanda, president of the Car Carrier Association of India, said such firms, which have routinely had to pay hefty bribes or fines when passing from one state into another to continue using their oversized vehicles, “no longer wanted to be outlaws and punished daily across Indian states”. Over 3,000 trucks had already been reduced in length in view of the looming legislation, he added.

Nanda also revealed his association had negotiated a 17% increase in rates with the major OEMs for the new, shorter vehicles, which should help to fund investment in the additional trucks the industry will now require to continue moving current volumes.

Not all automotive hauliers are happy with the move, however. Daman Dewan, secretary of the Automobile Carriers Welfare Association – which represents those moving two-wheelers in India – said his organisation had already begun talks in the northern state of Haryana to try and get the new rules delayed.

Further details on the implications for the vehicle sector of the new trailer limits will published online next week and there will be a further coverage in the forthcoming edition of Finished Vehicle Logistics magazine (July-September).