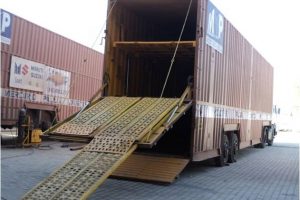 India’s car carriers have succeeded once again in negotiating higher rates with the majority of the country’s leading vehicle manufacturers for the transport of vehicles on car transporters conforming to the new 18.75-metre maximum trailer length.

Rates for the movement of vehicles on such transporters have increased by 22-23%, a substantial advance on the 17% rate rise negotiated last year between OEMs and the Car Carriers Association (CCA), but lower than their original demands for a 30% increase.

The move follows a three-day park-up by Indian car carriers in January in protest at the failure of OEMs to respond to their requests for an increase.

The new Central Motor Vehicles Rules (CMVR) regulation on car transporters, passed by the transport ministry in October last year, calls for a standard 18.75-metre trailer length for car carriers, whether semi-trailer or drawbar trailer. The rule will be legally enforced from April this year, from which time car carriers will only be able to load a maximum of eight vehicles on a trailer compared to ten on previous 22-metre trailers.

"In one stroke, the CMVR is making us load less vehicles for the same distance, so a revision incorporating post-October 7th developments has to be factored into the [fixed price for] freight," commented PV Subramani, chairman and managing director of Cargowings Logistics.

This reduction in load capacity comes on top of rises in fuel prices and road tolls in India in the last year. Spurred by these increases in operating costs, car carriers have been seeking a rate rise for some time.

The latest increase of 23% was reportedly led by one of India’s biggest carmakers, Maruti Suzuki.

DV Sharma, managing director of ICM Logistics, who took part in the negotiations with the carmakers, said: “Maruti does things automatically, [there is] no need to nudge them.”

There are indications that Honda India will match Maruti Suzuki’s revised rate for its shipments from its Greater Noida and Alwar plants, and Tata is also understood to have approved a revision to freight rates. Neither OEM has so far commented on the record regarding the dispute.

Other OEMS are mostly reported to be following suit, with the notable exception of Nissan, which has still not reached any agreement with its transport providers. Its vehicles are reportedly stuck at the Chennai plant as a result and the OEM is understood to be calling its carriers individually to discuss settlement.

The dispute comes at a difficult time for the industry, which has recently seen a sharp decline in vehicle sales following the disruption to the economy that accompanied the Indian government's surprise withdrawal of most currency notes in November.

'Emergency measure'Negotations between carmakers and their transport providers largely revolved around the involvement of the CCA, which represents 65 independent car hauliers across the country and whose membership accounts for 95% of the 15,000-plus car transporter fleet in India.

The CCA, which does not usually get involved in commercial negotiations, has described its involvement in the negotiations as a “one-off emergency measure”.

Vipul Nanda, president of the CCA and logistics director at Gefco-owned Mercurio Pallia, said that the association did not take up the issue with OEMs until it was approached by members who felt they were being ignored.

“Right from the beginning, we have always maintained the association will work only for social causes and will not enter into any commercial negotiations,” he said. “However, when members come to the association after being rebuffed by OEMs, we cannot wash our hands of it.”

Several OEM officials who preferred not to be named told Automotive Logistics they would be stepping up efforts to shift more finished vehicles from road to rail and coastal shipping. Carmakers in India remain overwhelmingly reliant on road transport for now, with some 95-97% of new vehicle movements going by road.

However, there is now some momentum behind efforts to improve the use of rail for automotive freight, including for finished vehicles. India now has more updated designs of rail wagons with much higher capacity than the existing modified passenger carriages and in 2015, 708 trains moved automotive traffic compared to 449 the year before ­– a 36% rise.

In addition, India’s major ports are introducing a discount of 80% for two years on vessel-related charges for coastal vehicle movements in an attempt to boost automotive sector demand for coastal transport.

OEMs have pointed out that rising global oil prices will keep the pressure on the road transport sector, given that the Indian government has removed price controls and aligned domestic fuel prices to a global price tag. As part of its goal of improving the road network, meanwhile, the government is also putting more tolls in place, which carmakers fear will also impact on road freight pricing.

Automotive Logistics understands that the average cost per vehicle for transport on either CMVR-approved or non-approved vehicles is approximately 65 rupees (95 cents) per kilometre.