Infiniti, Mercedes-Benz will build together in Mexico 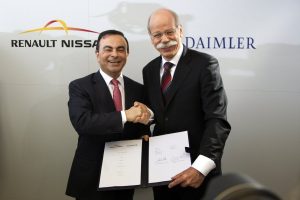 The rush to Mexico continues apace, with the Renault-Nissan Alliance and Daimler the latest to announce plans for a joint-venture factory in the country. The carmakers, which have had a global alliance since 2010, will divide investment of €1 billion ($1.36 billion) for a new assembly plant in Aguascalientes, in central Mexico, that will build compact vehicles both for Nissan’s premium Infiniti brand by 2017, and by 2018 for Mercedes-Benz.

The plant, which will be located close to existing Nissan facilities in Aguascalientes, will have capacity to build 300,000 vehicles annually by 2021, the companies said in a statement. A well-developed supply base, speed to market and good logistics links have all been cited among the reasons for choosing to build vehicles in Mexico. The companies are also exploring opportunities to work together closely on logistics.

Infiniti and Mercedes-Benz join a slew of brands, including Honda, Mazda, Fiat Chrysler and Audi, investing in new plants in Mexico. In November last year, Nissan opened the first phase of $2 billion investment at Aguascalientes, which was already the carmaker’s second plant in the city and third in Mexico, raising its production capacity in the country to 850,000 units annually.

While Daimler builds trucks and buses in Saltillo, Santiago Tianguistenco and Garcia, this would be its first plant for Mercedes-Benz passenger car production in Mexico. It already builds SUVs at its plant in Vance, Alabama, where it will also start building C-Class sedans this year.

In a press conference, both Dieter Zetsche, chairman of the board of management of Daimler and head of Mercedes-Benz Cars, and Carlos Ghosn, chief executive officer of Renault Nissan (both pictured), stressed the cost savings, faster times to market and economies of scale that would come from working together in Mexico. Zetsche said that the NAFTA region is the biggest market for both Mercedes-Benz and for Infiniti, with expectations that the premium compact segment will grow further.

“The plant in Aguascalientes will help us to serve this demand faster and more flexibly,” he said.[sam_ad id=6 codes='true']

Zetsche added that Mexico’s free trade agreements with the EU and the Mercosur bloc in South America were also significant, allowing the carmakers to export vehicles at lower duties.

Ghosn and Zetsche highlighted the maturity of the Mexican supply base, logistics and trade links as key factors in choosing the location. Zetsche said that Daimler would benefit from having access to a highly developed network of suppliers in Mexico, and that Nissan’s existing plant in Aguascalientes was “a big advantage terms of logistics and in terms infrastructure”.

The companies said in a statement that they expected a high localisation rate, which should further increase the capacity of the Mexican supply base. Already Nissan’s production in Mexico consumes around 84% of cargo from the country, according to a recent interview in Automotive Logistics with Daniel Saenzpardo, director of logistics at Nissan Mexicana.

The growth of other premium manufacturers in Mexico should help support this localisation as well. Mercedes-Benz and Infiniti join fellow German premium carmaker Audi, which will open a plant in San José Chiapa in Puebla state in 2016. There are reports that BMW will announce plans for a Mexico plant as early as this week, while there also press rumours that Fiat Chrysler will build Jeep models in Mexico. Kia is also said to be planning a Mexico plant. 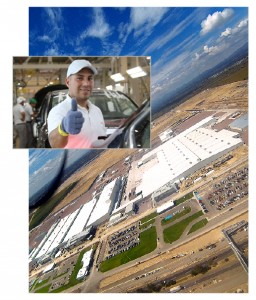 An alliance of more
For Mexico, Carlos Ghosn said that the carmakers would work together at every stage of engineering, design and production on the vehicles in Mexico. The collaboration will extend to logistics at least for in-plant material flow. "In-plant logistics will be managed in the framework of the plant which will be a 50:50 joint venture between Daimler and Nissan," Oliver Wihofszki, a spokesperson for Daimler, told Automotive Logistics. "Currently, evaluations are ongoing in order to create possible synergies with regards to inbound and outbound logistics."

With the largest market for both Infiniti and Mercedes-Benz vehicles built at the plant likely to be the US, it would be surprising if the two OEMs did not at least pool export volume of finished vehicles for transport. Nissan already has vehicle distribution centres at Aguascalientes, for example, which has rail connections for moving vehicles to the US.

Mexico has become one of the fastest growing production and export hubs for vehicles in the world. IHS Automotive forecasts that production will grow from 3m units in 2013 to around 4.5m units by 2020, with the majority exported. With the growth in volume and exports, however, there have been concerns about whether Mexico’s logistics infrastructure and service capacity is keeping up with the growth, especially for finished vehicle exports by rail or through seaports.

“Despite rail’s advantages, we have an area of opportunities regarding railcar capacity [for vehicles],” Saenzpardo told Automotive Logistics. “The total pool of equipment in North America may not be growing according to the volume demand.”

Daimler officials have also confirmed the need to upgrade infrastructure, in particular extending the existing rail connections to the joint venture plant in Aguascalientes. "Assessment of infrastructure shows a need for complementing the rail connection to the new plant," commented Wihofszki. "Especially for the delivery to Mexican ports and to the USA, an increasing volume per train is expected."

Read more extensive coverage about Mexico’s emergence as an automotive powerhouse in our special report, including features on the supply chain, outbound challenges and Nissan Mexicana.

This is the second global example this past week of the Renault Nissan announcing deeper ties with other alliance partners; the carmakers have now also taken majority control of Russia’s Avtovaz, maker of Lada, and are expected to work much more closely together in terms of purchasing, production and logistics.

The alliance with Daimler goes back to 2010 and includes around 12 projects, including the launch last week of joint four-cylinder gasoline engines in Decherd, Tennessee. The 250,000-unit per year plant will produce engines for use in the Mercedes-Benz C-Class and in the Infiniti Q50, which is currently built in Japan. Later this year Renault Nissan and Daimler will also start selling new versions of the Smart and Twingo city cars, which were developed on a shared platform and built between a Renault plant in Novo Mesto, Slovenia and a Daimler’s plant in Hambach, France.