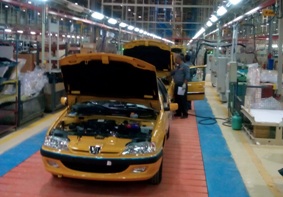 Iran's main carmaker, Iran Khodro Industrial Group (Ikco), has reported that it has doubled vehicle production at its plant in Iskandariya in Iraq to 100 units a day. The carmaker said that sales had increased in part because of a drop in transport fees, which had a knock-on effect on market pricing. There has also been an increase in the supply of spare parts to the aftermarket.

Ali Elmi, Ikco's deputy chief executive officer of exports, said that the high quality of the company's vehicles and the proper distribution of parts to its outlets across Iraq had resulted in a greater willingness among Iraqi consumers to buy Ikco vehicles.

The company makes a variety of brands in Iraq, including the Runna, Samand, Soren, Peugeot Pars and Peugeot 405.

Elmi said the company is looking at annual production capacity of 20,000 vehicles at the Iskandariya facility, which is Ikco's biggest assembly plant outside of Iran.

According to the company, Iran's total vehicle production surged by 72% to almost 400,000 over the same period, including passenger cars and pick-ups, compared to the same five months in 2013.

Last November, Iran signed an accord with six countries that involved the lifting of certain restrictions on the trade of vehicles and automotive parts. The US, Russia, China, France, Germany and the UK all participated in the accord.

In July this year, Iran Khodro restarted exports of vehicles to Russia and plans to send 10,000 vehicles there by 2015. The first shipment, sent from the carmaker's plant in Tehran, included the Samand and Runna sedans.