JAC expands in Russia and Ukraine with CKD production 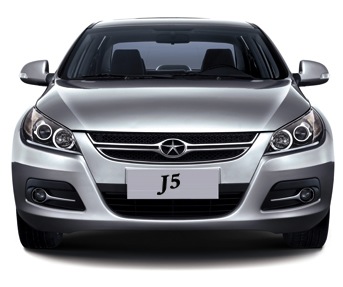 Chinese carmaker Anhui Jianghuai Automobile (JAC) has launched CKD assembly of the J5 sedan in Ukraine and has plans to launch similar assembly of the S5 crossover in Russia in a bid to expand its presence in the region.

The J5 facility is located at Bogdan Corporation’s car plant in the Cherkassky region of the country.

“To date, the production cycle involves the use of more than 30 components from Ukrainian suppliers,” said a JAC representative. “This new production enterprise will allow the company to significantly reduce the price of cars on the local market, as well as save on logistics.”

According to information provided by the company, the price of the J5, with a 1.5-litre engine and manual transmission, costs UAH 104,900 ($12,630) in Ukraine. The price for cars with an automatic transmission is UAH 129,900. Bogdan estimates that the opening of the production facility will enable the company to save around UAH 10,000 ($1,204) per car, which means in turn that the price of cars on the local market will decrease.

"The goal for the start of production of this brand with our Chinese partner is to reach share of the 2-3% of the passenger cars’ market in Ukraine in two years,” said Bogdan’s president, Oleg Svinarchuk. “Unfortunately, we don’t have very optimistic estimates for the market next year. Its volume will be about 180,000-190,000 cars," he said.

Focus on RussiaThe new line is designed for 10,000 cars a year but the plans for 2014 are slightly lower: JAC expects to produce 5,000-6,000 J5 sedans, at least half of which will go to Russia. To initiate export supplies the plant needs to achieve manufacturer certification CT-1, which is issued to companies with a localisation level of at least 51%. JAC expects to secure the certification in the coming months.

In parallel, JAC representatives disclosed plans for the creation of a similar CKD facility within Russia. "The assembly of JAC’s compact urban crossover S5 could be soon established at the Derways enterprise in the Russian Republic of Karachay-Cherkessia, said the JAC spokesperson.

CKD production in Karachay-Cherkessia looks set to be more extensive than in Ukraine. According to unofficial information, production could begin in 2015 with a capacity for about 20,000 cars.

Car production in Russia will enable JAC to save even more money than in Ukraine because Russian import duties on vehicles are higher, at 25%. Today JAC’s S5 costs RUB 630,000 ($19,100) on the Russian market. Compared to the 4-6% savings that JAC will make in the Ukraine by assembling the cars by CKD, after launching the proposed facility in Russia the saving will be up to 15-20% – so the price on the market will be lowered to approximately RUB 520,000, excluding inflation.